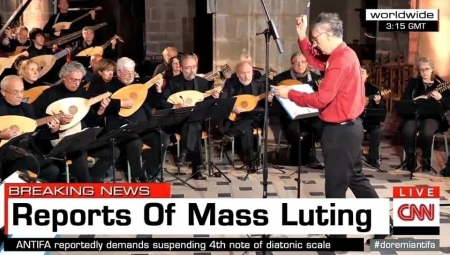 ROFLMAO Yeah! White People just don’t really get the whole riot and loot thing. In fact, as shown above, we just get it fundamentally wrong. 😆

This entry was posted on Saturday, June 27th, 2020 at 8:33 am and is filed under Humor, Music, Politics, Society. You can leave a response, or trackback from your own site.

What Did We Fight For?

While anvilicious, crudely and needlessly offensively worded, and a wee bit hysterical in presentation, this has some real truth to it. It truly does seem as if generation after generation of American men have fought, bled, and died for our People only to be forced to watch them degenerate and for many of them to actively turn against every value and bit of culture that was and still is America.

This entry was posted on Saturday, July 6th, 2019 at 8:50 am and is filed under Politics, Society. You can leave a response, or trackback from your own site.

The only thing wrong about the political cartoon above is that the Left’s
legionarii, the fake news purveying Lamestream Media has not, with one exception, admitted to being in the wrong for crucifying Nick Sandmann and his fellow Covington Catholic High School students. No, they, having set the narrative that these boys were racists – of course, they’re young, White soon-to-be men – the MSM has for the most part just used their own brand of apologetics to make it seem that all those Leftists who’ve called for everything up to the students’ murder had some reasonable or, at least, understandable motivation for their threats… which, of course, shouldn’t be taken seriously in the first place since they’re Democrats.

This entry was posted on Saturday, January 26th, 2019 at 7:34 am and is filed under Announcements. You can leave a response, or trackback from your own site.

This entry was posted on Tuesday, January 22nd, 2019 at 9:25 am and is filed under Society. You can leave a response, or trackback from your own site.

As a lot of people already know, CNN’s “Legal Analyst,” Areva Martin recently accused David Webb of being a racist or, at least very much not “woke” while being interviewed on his Sirius XM radio show, “Patriot” while discussing race, job qualifications, and applying for jobs .

I’ve chosen to cross different parts of the media world, done the work so that I’m qualified to be in each one,” Webb, a host on Fox Nation, told Martin in the interview. “I never considered my color the issue; I considered my qualifications the issue.”

“How do I have the privilege of white privilege?” Webb asked.

“David, by virtue of being a white male you have white privilege. This whole long conversation, I don’t have time to get into — ”

“Areva, I hate to break it to you, but you should’ve been better prepped,” Webb interrupted. “I’m Black.”

OK! Honestly, that’s just about as funny as things can get. Some professional race-baiting grifter – Martin’s a “Civil Rights” attorney – getting hoist on her own hate-fueled petard is hilarious and always will be so to me. Schadenfreude, it’s real.

Funny or not though, Martin’s mistake highlights some of racial problems and problem causers inside America’s borders. We’ve too many like Martin who make a career out of racism and who see everything through the lens of “oppression,” and who – displaying a level hypocrisy well past the border of the absurd – make ignorance- and envy-fueled assumptions about people, e.g., assuming Mr. Webb being White because his opinion was contrary to “Being Black.”

And, of course, to people like Areva Martin and those, such as CNN, who pander to- and enable her sort, “White” equals “Bad.” “White” equals the “Oppressors,” either those seen as active so or merely those who have “benefited” from “Whiteness.”

But Webb Is White

Remember race is a social construct with little to no scientific significance outside of the modern pseudo-sciences of psychology and sociology. Therefor, Mr. Webb’s “Whiteness” or “Blackness” is also just a social construct and social constructs are determined by opinion and bias less than by a specific set of empirical facts

And yes, I make no bones about considering psychology and sociology to be pseudo-sciences. They’re both more of an art than a science and both are plagued by extreme biases.

And, as Mr. Webb is not maintaining the Black Narrative or behaving in a “Black Enough” manner, he’s essentially White. This is because the cultural gatekeepers of Blackness view that as the sin of Respectability Politics, something that they don’t willing tolerate.

Respectability politics is, at its root, the inability to look into the cold dark void of history. For if black people are — as I maintain — no part of the problem, if the problem truly is 100 percent explained by white supremacy, then we are presented with a set of unfortunate facts about our home.— Ta-Nehisi Coates
“Charles Barkley and the Plague of ‘Unintelligent’ Blacks”

And yeah, the Black Enough Blacks and those that make their living off of that particular narrative have names for such people: Uncle Tom, Oreo, Sell-Out, Race Traitor, Graham Cracker, and House Nigger to name the most common ones. But they all mean White or too close in culture and thought to being White.

So, while in one sense, Marin was stupidly and ignorantly wrong, in other ways – the ways that matter to her and her people – she was right.

This entry was posted on Friday, January 18th, 2019 at 11:25 am and is filed under Society. You can leave a response, or trackback from your own site.