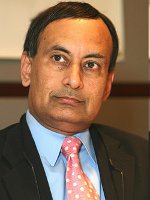 While I have some lingering doubts as to the truth of this, they don’t really matter very much since most of the world is taking this good news on faith. Hence I will accept these claims at face value until the unlikely event that they’re proven false.

That being the case, proper accolades are much in order, irregardless of my overall feelings about the Obama Regime, their near total lack of concern over those feelings, and the improbability that any of them would ever read this post:

To loosely paraphrase the First Lady, for the first time I’m proud of something you’ve done as President of my country.

President Obama acting as the POTUS and C-in-C gave the order for DEVGRU and the CIA to undertake a “kill mission” – codenamed Operation Geronimo – to exterminate Osama bin Laden in t’s compound in the affluent suburb of Abottabad, Pakistan – a mere 35 miles from the capital, Islamabad. Obama ordered the commencement of Operation Geronimo without notifying the Pakistani government due to realistic fears that they would help Osama bin Laden escape.

To paint this in a negative manner, as America’s enemies, both foreign and domestic, will certainly do, President Obama unilaterally violated the territory of a sovereign nation and violated several articles of international in order to assassinate a private citizen in a private residence, killing multiple others in the process of this act.

More accurately stated, President Obama put the needs and desires of the American people before the sovereignty of a “state” that created and continues to support the Taliban and Al-Qaeda and did not allow the puling sensibilities of foreign interests, most of whom are no friends of America, to get in the way of doing his duty.

It was a job well done, both in specific execution and in the tone of the message it sends the world.

This entry was posted on Wednesday, May 4th, 2011 at 9:18 am and is filed under Politics. You can skip to the end and leave a response. Pinging is currently not allowed.