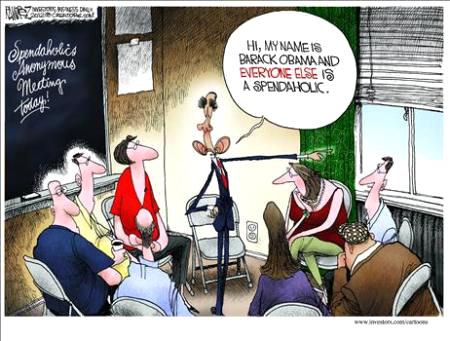 Comments Off on Responsibility Anonymous

Have you ever wondered why America’s politicians are so polarized and divided, and apparently so incapable of ever reaching even the minimum necessary levels of compromise that is needed to pass legislation?

The answer is actually quite prosaic. They’re two parties, Republican and Democrat, who are divided by a common language. A case in point:

That doesn’t really leave any room for compromise, does it? And that’s the problem in a nutshell. As they can’t even communicate with each other, there’s little or no hope that they can cooperate with each other.

I’d suggest that they put aside other issues and work out a common lexicon and dictionary to speak and work from, but that would only result in decades of argument and expense. They are the people who weren’t confident of what the definition of “is” is, after all. 😉

There is, and has been, this ongoing fantasy about the various and disparate religions and ideologies coexisting in peace and, presumably, mutual respect.

Can’t We Just Coexist in Peace?

Unfortunately, like all fantasies, at some point – for those, at least, who aren’t utterly insane and lost in delusion – the waking world and reality intrudes upon the fantasy.

Infidels! I Will Kill You!

That’s the problem. Islam, the religion of war, terrorism, and sundry abuses of the soul doesn’t want to coexist. It wants to conquer and supplant all other religions, philosophies, ideologies, and political system. It’s cultists do not, and cannot while still being Muslims, work or play well with others.

America is, indeed, special in many ways. Sadly and shamefully, some of those ways are particularly of the nature of “short bus special.”

Only in America, would people take rappers who brag about shooting people, selling drugs, and running strings of whores seriously when they complain the police are targeting them unfairly.

Yes, there are just some things that one can only find in America. This is something that the residents of other nations should, perhaps, be grateful that they aren’t part of or saddled with. 🙄