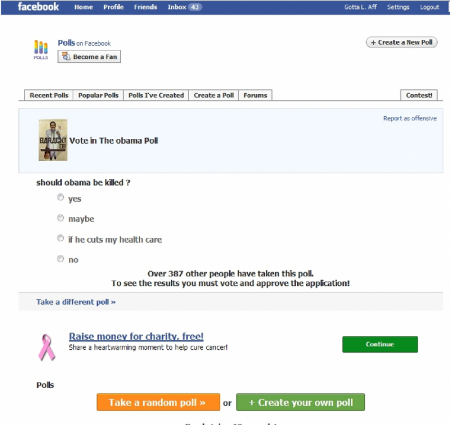 NOTE: For you Liberals who are terrified of anyone who would ask such questions and wish to do something about it, my local US Secret Service Field Office can be contacted at (718) 840-1000. Feel free to report me. 😉

This disturbing video was filmed at the B. Bernice Young Elementary School in Burlington, NJ and uploaded on June 19, 2009. This is what happens when Americans foolishly and naively allow Obama’s filthy cultists to have access to our children.

For those ignorant, Liberal fools who might dispute that this is cult behavior, one song that the children were taught quotes directly from the spiritual Jesus Loves the Little Children, though Jesus’ name is replaced with Obama’s: “He said red, yellow, black or white | All are equal in his sight. Barack Hussein Obama.”

I’d like to say that I guess that the Liberals now understand what the complaints were about Obama’s Back to School Speech – but such understanding is beyond them.

While proper and appropriate punishments will never be enacted upon cultist who perpetrated this atrocity by any school, state, or legal agency, at least the Commissioner of New Jersey’s Department of Education has ordered the school’s superintendent to review the matter citing “inappropriate partisan politics in the classroom.”

If you’re an American man of a certain age just admit that you’ve got an Inner Dork – especially when comes to Star Wars, Jedis, and lightsabres. Hellfire, even the ever campaigning President Obama has one, and he seems less than ashamed of it.

Of course what’s not shown in the picture above is the poor Secret Service agents, one in the President Bush mask and the Emperor Palpatine robes and the other with the Vice-President Cheney mask and the Darth Vader costume.

Obama-wan Keynes-nobi will have his fantasies though. The rest of us – at least the American people – would just be better off if he kept them confined to the White House lawn 😉

Chinese nationalism and collectivism is a wonder of the world – not a good and glorious wonder, but a wonder-none-the-less. China’s hive mind of collectivism under their Communist regime might not be quite so pervasive as they would wish the Civilized World to believe though. 😉

Of course it’s easy for the Evil Old Men in Beijing to coerce their population into at least mouthing harmony with the regime’s agenda and ant-like collectivism. When the “or else” in question is having your vital organs harvested by the State, it’s amazing how tractable people become.

During President Obama’s Sunday morning talk show blitz he bitterly rejected the criticism that his proposed mandate that all Americans must by law carry health insurance coverage would burden the American people with yet another new tax, something that the President has promised during his campaign not to do.

The truth of the matter at hand can be found in Subtitle D – Shared Responsibility of Senate Finance Committee Chair Max Baucus’s proposed America’s Healthy Future Act of 2009.

The excise tax would apply for any period for which the individual is not covered by a health insurance plan with the minimum required benefit but would be prorated for partial years of noncompliance. The excise tax would be assessed through the tax code and applied as an additional amount of Federal tax owed. No excise tax will be assessed for individuals not maintaining health insurance for a period less than or equal to three months in the tax year. However, assessed excise taxes for those not insured for more than three months include the entire duration the individual was uninsured during the tax year.

Leaving President Obama’s snideness, bitterness, and obviously growing desperation aside for the moment, this was one of his more stupid lies, reminiscent of his prevarications about key support for ObamaCare. He really should stick to well-nuanced disingenuousness about Americans being able to keep the healthcare if they like it, abortions not receiving federal subsidies, and illegal immigrants not getting expanded coverage.

ObamaCare mandates that every individual American must purchase health insurance and the “Baucus Bill” would institute a tax – specifically an Excise Tax – on anyone who failed to do so. It’s a tax, idiot! It’s even called a tax in the bill in question.