Before I going any further with this, thanks need to be tendered to Cmblake6 for this video which I scarfed off of his blog.

OK, I’ve always been a fan of spaghetti westerns, but when a Italian band like the Village Girls releases “Thank God I’m A Country Girl” my enjoyment of the genre reaches whole new heights.

This entry was posted on Monday, May 4th, 2015 at 10:03 am and is filed under Music. You can leave a response, or trackback from your own site.

The 2010 World Cup has started in South Africa. This means that for approximately the next month football – called soccer in the US – fans will be fixated upon the international competition, which happens only every fourth year, even more than they are normally riveted to the league play that they normally follow.

Thus, even more than usual, the world will for the next month be filled with bored and more than a little annoyed football widows – and not a few soccer widowers like myself.

But, even if you’re like me and have little or no interest in the game, there are some parts of the global phenomenon that is the 2010 World Cup that worth following. ­¤śē

That’s certainly worth following and I, for one, am certainly of fan of beautiful women wearing nothing but bodypaint, as previous posts prove. While I’m largely bored by futbol / football / soccer, I don’t think I could ever get bored with looking at beautiful women like: Abbey Clancy, Bethany Dempsey, Melissa Satta, and Sarah Brandner. I doubt that many men, even those like myself who are not fans of the sport, would do so.

This entry was posted on Tuesday, June 15th, 2010 at 5:40 am and is filed under Society. You can leave a response, or trackback from your own site. 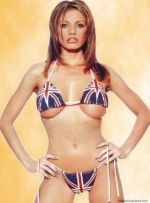 I hope that Triumph doesn’t make the mistake of ignoring their “bottom line” by focusing their efforts exclusively on the bra. That’s the sort of marketing mistake that could hurt them in “the end.” ­¤śē

END_OF_DOCUMENT_TOKEN_TO_BE_REPLACED

This entry was posted on Wednesday, May 26th, 2010 at 11:53 am and is filed under Society. You can leave a response, or trackback from your own site.

Scientific research into the causation of self destructive and/or violently antisocial behavior is worthwhile. It had in the past been assumed that people turned to drugs, gangs, violence, and general thuggery solely due to environmental factors.Ā Discovering that some of the thugs were just “born bad,” or at least with a genetic predilection for bad behavior is extremely useful data; it allows society to level set its expectations.

During the trial, Bayout’s lawyer, Tania Cattarossi, asked the court to take into account that her client may have been mentally ill at the time of the murder. After considering three psychiatric reports, the judge, Paolo Alessio Vernņ, partially agreed that Bayout’s psychiatric illness was a mitigating factor and sentenced him to 9 years and 2 months in prison Ś around three years less than Bayout would have received had he been deemed to be of sound mind.

For the new report, Pietro Pietrini, a molecular neuroscientist at Italy’s University of Pisa, and Giuseppe Sartori, a cognitive neuroscientist at the University of Padova, conducted a series of tests and found abnormalities in brain-imaging scans and in five genes that have been linked to violent behaviour Ś including the gene encoding the neurotransmitter-metabolizing enzyme monoamine oxidase A (MAOA). A 2002 study led by Terrie Moffitt, a geneticist at the Institute of Psychiatry, King’s College, London, had found low levels of MAOA expression to be associated with aggressiveness and criminal conduct of young boys raised in abusive environments.

Thankfully, this foolishness was perpetrated by an Italian court, not an American one so the wrong-headed precedent that it sets won’t immediately have an adverse effect upon the American court system. Sadly though, it’s only a matter of time before some Liberal judge in America reaches the same dangerous conclusion, most likely somewhere on the Left Coast. ­¤Öü

This entry was posted on Saturday, October 31st, 2009 at 10:01 am and is filed under Society. You can leave a response, or trackback from your own site.