Biden Makes This Less Funny… And A Lot More Likely

Yeah, there’s core of ironic humor in the thought of Biden and NATO “asking” Germany to move their military through Poland to threaten and possibly engage Russia. That humor, however, is greatly lessened by the horrific fact that Biden is making it far more likely that this – and WW3 – will happen… and that it will be an at least limited nuclear exchange.

With Biden – or his handlers/nursemaids – choosing to escalate his war against Putin by both sending the 101st Airborne Division to the Ukrainian border and moving our newer, upgraded B61-12 tactical nuclear weapons to NATO bases in Europe, jokes about Germany being involved in a land war in Poland against the Russians aren’t as funny as they used to be.

And, with President Trump officially running for POTUS in 2024, the likelihood that Biden and Co. will willfully cross that lethal Rubicon and start the next major war became much more likely. Biden, after all, claims that he only ran for office to remove President Trump and has declared him and any and all who support him terrorists and existential threats to democracy. It seems horrifically plausible that Biden would prefer WW3 and the destruction of America over “loosing its soul” to President Trump and American patriots.

And, oh yes! Let us never forget that Biden and the majority of Democrats either believe that President Trump was elected through “Russian Collusion” or are in position where they have to repeat and abide by that shibboleth. Hence, Biden’s war against Putin is somewhat of a proxy war against President Trump and the patriots who elected him (Twice so far?)

I mean, don’t get me wrong; Germany being asked to move through and perforce occupy parts of Poland in order to fight Russia is funny. Biden just makes it less funny and a lot more worrisome.

This entry was posted on Sunday, November 20th, 2022 at 11:02 am and is filed under Politics. You can skip to the end and leave a response. Pinging is currently not allowed. 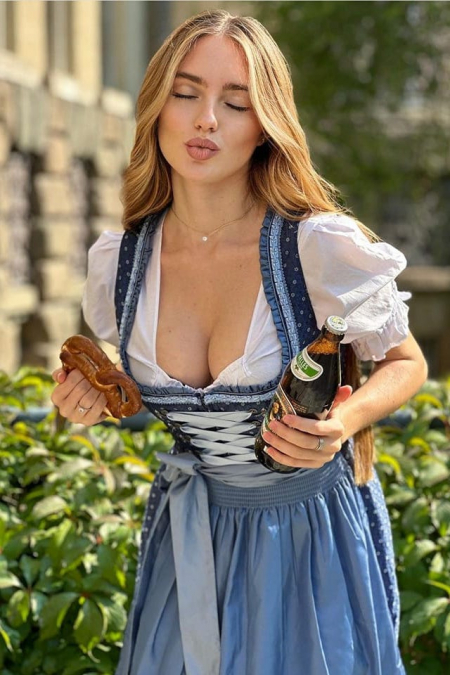 Time To Enjoy Beer, Pretzels, and Boobs
(Click to Enlarge)

We’re winding up this year’s Octoberfest. It’s time to enjoy some beer, pretzels, and boobs while you still can.

This entry was posted on Sunday, October 2nd, 2022 at 7:00 am and is filed under Beer, Food & Drink, Humor, Society. You can skip to the end and leave a response. Pinging is currently not allowed.

Learn German! It’s fairly easy as languages go, especially for those of us with English as first language. And yes! Schild + Kröte = Turtle. 😆 A whole lot of words in German are just concatenations of two or more – sometimes far, far more – words.

C’mon! Shield Toads are Turtles! How can you not want to learn German after knowing that!?! 😆

This entry was posted on Monday, May 23rd, 2022 at 10:29 am and is filed under Humor. You can skip to the end and leave a response. Pinging is currently not allowed.

It’s Oktoberfest and there’s still time to celebrate Germany’s finest holiday and one of their greatest gifts to the Civilized World. Just, celebrate it right! 😆

Oh, and pro-tip: Gentlemen, moderate your beer-drinking a bit because bierschwanz is the enemy of unzucht.

This entry was posted on Thursday, September 30th, 2021 at 6:37 am and is filed under Humor, Society. You can skip to the end and leave a response. Pinging is currently not allowed.

Personally, I’d say that it’s quite obvious that die Kellnerinnen (Waitresses) of the BiergÃ¤rten (Beer Gardens, i.e., bars) are not evidence, but proof, that God wants us to be happy … and wants us to propagate. 😉

This entry was posted on Sunday, February 7th, 2021 at 10:17 am and is filed under Humor, Society. You can skip to the end and leave a response. Pinging is currently not allowed.