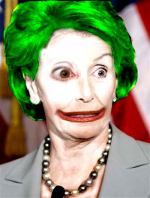 The next step in Obama and his Liberals’ destruction of America and the American values of liberty and self-reliance has been taken. The US House of Representative, led by House Speaker Nancy Pelosi (D-CA) and her cabal of vermin, passed HR 3962, mendaciously named the, “Affordable Health Care for America Act,” in a 220-215 vote.

39 Democrats – what are called, “Blue Dogs” – voted against this abomination, but one lone Republican turned traitor to Party and Country, and voted in favor of destroying America.

The traitor’s name is Rep. Anh “Joseph” Cao (R-LA) and he represents the New Orleans district (District 22), a decidedly Democrat – and, of course, their minority tenants – stronghold.

Today, I obtained a commitment from President Obama that he and I will work together to address the critical health care issues of Louisiana including the FMAP crisis and community disaster loan forgiveness, as well as issues related to Charity and Methodist Hospitals. And, I call on my constituents to support me as I work with him on these issues.

Rep. Cao – known now as “Caowardly Traitor” or “Yellow Dog” – was obviously bought off by Obama and his Liberals. Of course, knowing Obama and his paid political assassin, Rahm Emanuel, some form of pressure beyond mere bribery was probably brought to bear upon Rep. Cao prior to his defection.

Americans must remember this day and this vote. Those who voted for this bill and against America must be harshly and mercilessly punished by any and all means available.

Attention will now shift to the US Senate where Sen. Harry Ried and his nest of Liberal vermin holds sway.

Perhaps we can still save ourselves, our nation, and our children’s future from Obama and his Liberals, but I hold out little hope that it can be done by mere words. Action, now as a preventative or later as a punishment and remediation, will likely be needed if Americans our to recover our nation from the domestic enemies that now try to rule it.

This entry was posted on Sunday, November 8th, 2009 at 8:38 am and is filed under Politics. You can skip to the end and leave a response. Pinging is currently not allowed.