I Can See November

America has begun the July 4th holiday weekend, a time when we celebrate our independence and the creation through the force of will and of arms of our sovereign nation. For most of us the holiday weekend will be a joyous time, both because of the amazing divine gift to the world that it celebrates and – in all cruel honesty – because for many of us it is a welcome three-day weekend and break from the drudgery of our workplaces.

For some though the 4th of July, America’s Independence Day, may not be quite so joyous or even pleasant. 😉 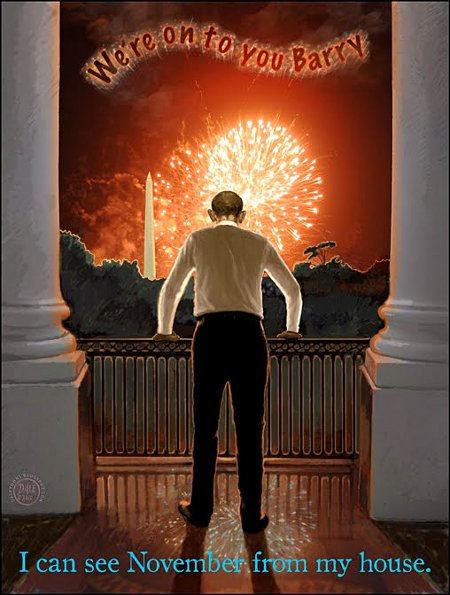 I Can See November From My House

Yes! The American people, those within her borders who love our country and hold fast to the ideals of liberty and sovereignty that it was founded upon, are “onto Obama” and his coteries of Liberals that have infested our federal government and President Obama, not being an utter fool, can certainly see that fact of life, liberty, and the pursuit of happiness.

President Obama can certainly see that we, the People are not tolerant of his ideology; the way a great many of the GOP primaries have gone and the way that some at-risk Dems have changed their tunes and voting has painted a clear picture of that.

Oh yes! The upcoming “fireworks” are not going to make President Obama and his Liberal cabal happy at all. 😛

This entry was posted on Saturday, July 3rd, 2010 at 8:02 am and is filed under 2010 Election, Humor, Politics. You can skip to the end and leave a response. Pinging is currently not allowed.

One Response to “I Can See November”