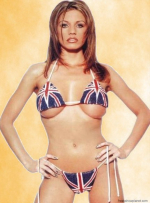 I hope that Triumph doesn’t make the mistake of ignoring their “bottom line” by focusing their efforts exclusively on the bra. That’s the sort of marketing mistake that could hurt them in “the end.” 😉

This goes well beyond deciding how many of each size bra to manufacture and how many to expect to sell in size on a per country basis. The results of this study will enable Triumph International to take cultural mores and attitudes into account when deciding what bras to make for each market using some of the findings.

The above is all critical information for Triumph International just as similar information would be critical to the ongoing success of any global or near global manufacturer of finished goods.

Then we have what is, to my mind, the truly important data uncovered and published by this study, that involving the facts of women’s bodies as compared with their body image, expectations of what is considered normal or beautiful.

So what does that all mean? To start with, it means that the fashion industry, the media, and the weight-loss industry have promulgated a body image ideal that is not even close to being representative of the female population and is diverging from reality further and further as time goes by.

Triumph doesn’t market in the US so we weren’t included in the study. Yet I would wager that far fewer than 75% of American women claim they are satisfied with their overall appearance.

That isn’t really news, but the extent of the difference between the created ideal and the reality of women’s sizes and shapes is noteworthy. In England, the average woman’s dress size is 16 (US 14) which is also reported by the SizeUSA study as being the average dress size of American women. This means that, since “plus sizes” start in the 14 – 16 range, the average woman in either Britain or America is being forced straight into the “fat clothes,” all the while being told by the media – and now the government – that she has to lose weight even though she’s actually the normative female – and possibly healthier than her scrawnier counterparts.

Worse, the clothing designers – mostly either queers or women of uncertain sexuality, as in sexual vs. asexual – design clothes to fit their stick figure models which then do not fit or hang right when worn by actual women. This just compounds the women’s negative body image to the detriment of everyone except the weight-loss industry who gladly sell anyone and everyone “self worth” for just $10 a day.

Face facts; real women have curves – delicious, voluptuous curves. They do not look like young boys with breast implants and they certainly do not look like prepubescent girls. I bluntly question the sexuality of any man who thinks otherwise because they must either be queer or a pedophile.

What in the name of all the Hells do those emaciated creatures have to do with either women or beauty except possibly as an example of that which is neither? Someone really needs to tell them that neither heroin nor cocaine is a food group and that dessert is not sticking your finger down your throat.

Perhaps though, with Triumph International’s study results getting global attention, some attitudes may start changing and some destructive fantasies may be finally purged from society. I’m not holding my breath though. 🙁

This entry was posted on Wednesday, May 26th, 2010 at 11:53 am and is filed under Society. You can skip to the end and leave a response. Pinging is currently not allowed.

2 Responses to “Britain’s Busting Out”