Periodically – normally either while they’re losing an election or immediately after having lost one – our domestic enemies will bemoan the “education gap” between them and Americans, who vote for Republicans. The rest of the time they tend to be patronizing and sarcastic about it and those “ignorant bumpkins” in rural America.

Yet, what is truer is that there is a widening Indoctrination Gap between the Leftists and the American people. A couple of generations of ever-increasing left-wing indoctrination being added to- or disguised as “higher education” has both guaranteed that college graduates would at least lean Left and that Americans would more and more reject the institutions that did this and which continue to escalate their doing of it.

And, to cement things and increase both the divide and the Leftists’ indoctrination of the college educated, the graduates’ incurred debt, declining ROI on their education, and the need or implanted desire to move to higher cost of living urban centers, all conspire to both separate the two groups further and to make Americans think poorly of college as path to take in life.

But hey! What do I know? I’m just a deplorable, knuckle-dragging ignoramus…

This entry was posted on Saturday, December 8th, 2018 at 11:03 am and is filed under Politics, Society. You can leave a response, or trackback from your own site. 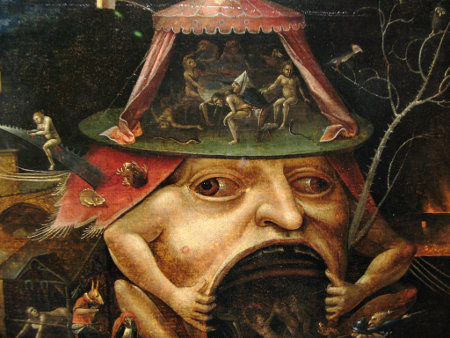 This entry was posted on Thursday, October 15th, 2015 at 7:43 am and is filed under Politics, Society. You can leave a response, or trackback from your own site.

To start with, there was before this date no such word as clerisialism or its antithesis. I, in my hubris and out of specific necessity, just coined it. It is meant to denote an “ism” predicated up the noun, “clerisy” – a distinct class of learned or literary people.

What can I say, I may be arrogant, but English – especially American English – is a living language.

Alright, now that I’ve given longer than truly needed shrift to the linguists out there, let me continue on to substance of the post…

There’s a once-again growing trend towards hysteria, especially amongst Leftists, that the American people are growing more and more anti-intellectual in outlook and ideology. This is a cyclical plaint from the left-wing intelligentsia that returns whenever whatever idea they’re pushing at that time is rejected by the American people. It is also as wrong as it is recurring.

No, what America is experiencing is a rise in what I have dubbed anti-clerisialism. Large swaths of the People are rejecting the Liberal and Progressive clerisy and are denying that that these Leftists have any form of valid magisterium. We are rejecting the Left’s claim of authority to teach and indoctrinate, not rejecting education or intellectual pursuits.

This entry was posted on Wednesday, January 7th, 2015 at 12:08 pm and is filed under Society. You can leave a response, or trackback from your own site. 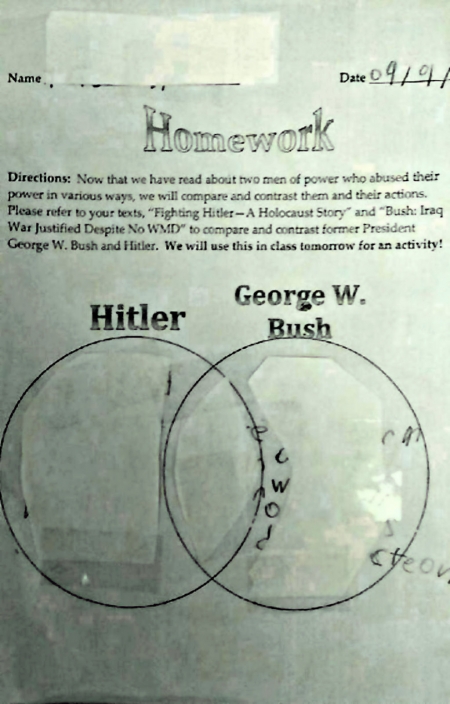 Liberals and Progressives always come out strong and strident for education, seeing themselves as the cleristry that must guide and tend the vast, unwashed masses of churls. Looking at them and the nation, this is ironic since they seem woefully bad at math. 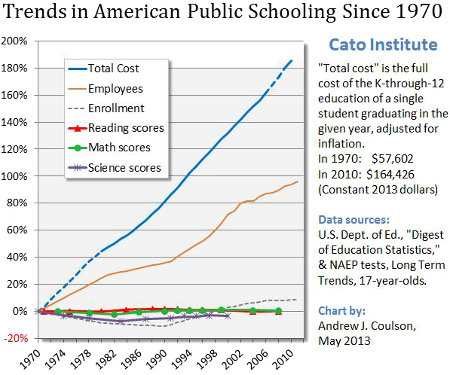 To add fixed numbers to these trends, let it be known that total K-12 education expenditures in the US are approximately $661 billion at this time, taking into acct all federal, state, and local funding. We are also spending 2.9 times per student (in inflation-adjusted 2013 dollars) in 2013 that we were in 1970.

Yet the educational outcomes in reading, math, and science are nigh on flat lined during that same 43 year period.

It doesn’t take a genius to see and understand that America is spending inordinate amounts of money on attempting to educate our nation’s youth and receiving little or nothing in return for it. And yet the Liberals and Progressives not only rail against reduction in this waste but demand even more, and more, and more of it.

We’re left with two possible conclusions. Either the Liberals and Progressives and very bad at math and never took even basic Home Economics in school or their constant demands for more and more spending on education have nothing to do with teaching America’s children needed skills and knowledge.

This entry was posted on Saturday, June 21st, 2014 at 7:10 am and is filed under Politics. You can leave a response, or trackback from your own site.