File this one under Irony, or Schadenfreude, or Laugh So You Don’t Cry… 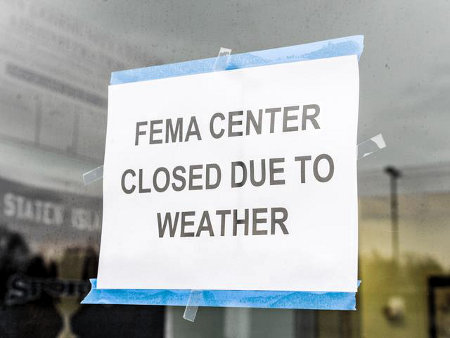 Staten Island, battered fairly badly by Sandy, found out as Wednesday’s Nor’easter was rolling in that FEMA was closing it centers due to inclement weather.

This entry was posted on Thursday, November 8th, 2012 at 5:19 pm and is filed under Humor, Politics, Society. You can skip to the end and leave a response. Pinging is currently not allowed.

This entry was posted on Monday, February 27th, 2012 at 2:00 pm and is filed under Politics. You can skip to the end and leave a response. Pinging is currently not allowed.

There seems to be a definite bias in the media’s portrayal of government interactions with natural disasters in America. It’s a bias that seems to have its basis on the both the race of the victims and the race of the current President of the Unite States. This is a shameful thing, but not one that anyone who is clear of thought would fail to expect. After all, the media has continued to gloat over installing America’s first Black President, Barack Obama.

The media was quick, strident and persistent in their attacks on President Bush in the wake of hurricane Katrina’s destruction of large swaths of New Orleans, LA. Their incessant diatribes painted a very negative picture of Bush’s, the federal government’s, and FEMA’s response to the situation. They made sure to vilify the US government in general and President Bush in particular – all the while providing a sympathetic venue for New Orleans’ mayor, Ray Nagin’s racism and hate speech.

Where is the media now? Why are they so silent on the latest deadly disaster to impact a segment of America?

In the likely case that you haven’t heard about it, the Midwest was hit by savage ice storms a few days ago.  At least 42 people died in the storms and literally a million or more people are without power or water days after the storm has passed. It’s a total fiasco and FEMA is barely involved at all, though the Governor has deployed all his available National Guard forces to help maintain order and work to rescue people from lethal conditions. FEMA’s lack of presence in the wake of the ice storms is a cause for must anger and resentment among the population of Kentucky.

Yet where is the media in all this? There has been the same sort of ineffective response from FEMA to the Kentucky ice storms as there was to New Orleans’ hurricane, and there hasn’t even been a “heartfelt condolences” visit from President Obama – yet the media withholds its ire. Why is this different?

When “Chocolate City” – Mayor Nagin’s own words or yammerings – is devastated, anything less then full federal relief is cause for media outrage. When whole counties in Kentucky that are filled with blue-collar Whites who “cling to their God and their guns” – let’s call then “Vanilla Counties” – is laid waste,  it’s a whole different (non)story apparently…

This entry was posted on Sunday, February 1st, 2009 at 2:13 pm and is filed under Politics, Society. You can skip to the end and leave a response. Pinging is currently not allowed.