I understand and sympathize with the many, many Americans who either believe that Obama is a Usurper or have strong doubts about the boy’s eligibility to be POTUS. I do with, however, that they had a better understanding of problem solving. 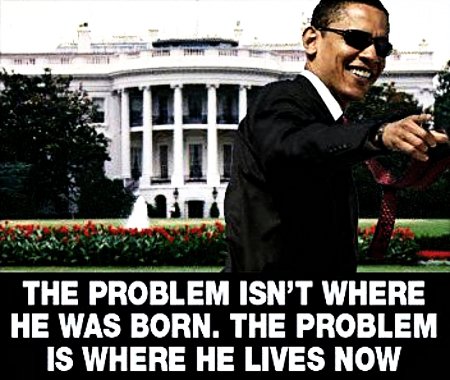 First You Must Understand The Problem

To solve for any problem – and the Obama Question needs a solution post haste – it is first necessary to understand what the problem is.

America’s problem is not – or, more accurately, no longer – where Obama was born; it’s where he’s dossed down now!

This entry was posted on Thursday, June 21st, 2012 at 9:11 am and is filed under 2012 Election, Humor. You can skip to the end and leave a response. Pinging is currently not allowed.

One thing for all to remember about Obama is that judging by his words, deeds, and choice of those he surrounds himself with, is that he’s not American, not in his heart and soul. Or, at the very least, that is how he and his coterie have crafted his public image.

It may seem to be an odd course of action for someone who previously claimed to not accept partisan divisions and to hope for a unified America, but only if one was foolish and naive enough to believe anything that Obama says about his beliefs and goals.

One would also have to set aside the basic rules of realpolitik to find Obama’s “otherness,” real or portrayed with great skill, to be surprising. Divisiveness is far more effective as a political tactic than is “unifying” and Obama has always diligently and dutifully followed the rules of realpolitik.

One has to remember that this “otherness” of Obama is exactly what America’s domestic enemies, the oikophobic Liberals, love about him. It also lets them paint the American people as racist and xenophobic, which feeds their own preconceptions of America as a place of evil that must be brought low.

It’s fairly obvious that the upcoming 2012 elections are going to be a base vs. base war with, as happened in 2008, the “moderates” and “independents” split roughly down the middle. This means that Obama’s “otherness” is a useful political coin, but one that works to galvanize friend and enemy alike.

This entry was posted on Friday, May 27th, 2011 at 5:37 am and is filed under 2012 Election. You can skip to the end and leave a response. Pinging is currently not allowed.

While there is in many Americans’ hearts and minds some doubt remaining as to Obama’s status as a “natural born citizen” and, hence, his eligibility to be POTUS, there can now be no doubts whatsoever as to why Obama chose to respond to Donald Trump’s demands for him to produce his “long form” birth certificate. 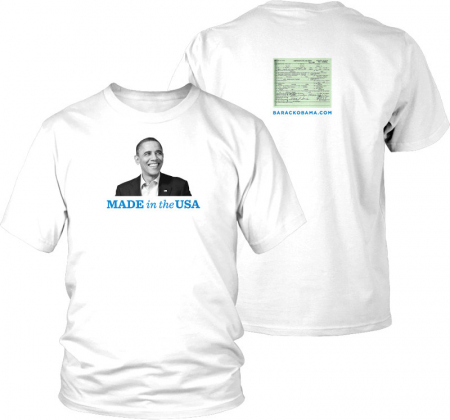 Obama’s 2012 Campaign T-Shirt – Made in the USA
(If Strong of Stomach, Click to Enlarge)

Yes, for a mere $25 functionally anonymous donation Obama’s supporters across the globe can purchase this shirt from Obama’s campaign website. For $15, they can get a coffee mug. Both shirt and mug feature the image of Obama’s birth certificate.

Americans have to remember that, to Obama, everything is about the election campaign; that’s his sole comfort zone. Almost anything he or his coterie due is founded upon that simple truism.

Obama and his campaigners know that Obama’s base has weakened since he took office. They also know that it’s far easier to get their supporters fired up to fight against the American people than to get the majority of them to fight for Obama – and they don’t have President Bush to blame and malign anymore.

On the brighter side, such a t-shirt would be considered a “fixed distinctive marking, visible from a distance” and, hence, a small step towards honesty.

No doubts remain. Obama’s long belated release of his birth certificate was solely about Alinsky-esque election politics, specifically the politics of pandering, provocation, and division.

This entry was posted on Wednesday, May 18th, 2011 at 3:26 pm and is filed under 2012 Election. You can skip to the end and leave a response. Pinging is currently not allowed.

Jeff Goldstein of protein wisdom has this to say about the Obama Regime’s refusal to disseminate photos of Osama bin Laden’s post-extermination remains:

Evidently, the SEAL team “assaulters” didn’t have the good sense to attach fake electrodes to dead Osama’s genitals, or put a dog collar around his putrid neck. Because were that the case, no force on earth could keep the photos from being splashed all over the internet.

“We don’t trot out this stuff as trophies,” Obama told CBS’s Steve Croft.

Coffin-draped caskets of American soldiers, on the other hand? Why, INFORMATION MUST BE FREE!*

H/T to Steve B over at Tattered Bits of Brain for the link to Protein Wisdom, which I shamelessly repurposed.

Mr. Goldstein, with ample sarcasm, sums up what passes for modern society and the underlying double standard of Obama and his Liberals when it comes to depictions of the dead.

This entry was posted on Monday, May 9th, 2011 at 5:10 am and is filed under Politics. You can skip to the end and leave a response. Pinging is currently not allowed.