I posted before about how ,in the last year or so, I’ve seen reports from numerous studies that purport to indicate that the differences between Americans and Liberals is biological. In some cases they even claim that it’s genetic. Since I had posted a diagram of the Liberal brain, it’s only fair to post a similar diagram of the American brain so that one can compare the different structures: 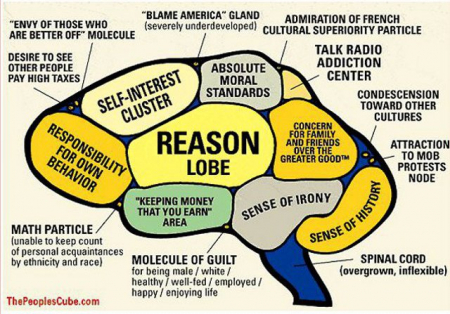 A Cross Section Of The American Brain

Whether the cerebral development differences are genetic, congenital, or pathological in origin doesn’t, in the short-term, really matter. The American brain functions quite differently than the Liberal brain. 😉

This entry was posted on Sunday, July 3rd, 2011 at 7:04 am and is filed under Humor, Politics, Society. You can skip to the end and leave a response. Pinging is currently not allowed.