OK. Wow! That’s something that I never thought of. Damn! Moms are babies’ Mecha. And here I thought that they’re, like the rest of us, just living ships for our cut flora. 😆

This entry was posted on Tuesday, September 20th, 2022 at 5:30 am and is filed under Announcements. You can skip to the end and leave a response. Pinging is currently not allowed.

The Dems’ 2022 dating woes just keep getting worse. And that’s got to be bad for them since they were already pretty much failing at sex. For them, Netflix and Chill just keeps getting more and more difficult and more fraught with more and more problems, and that’s if they can figure out who to have sex with. 😆

This entry was posted on Friday, May 20th, 2022 at 5:00 am and is filed under Humor, Society. You can skip to the end and leave a response. Pinging is currently not allowed.

Now, it’s true that we’ve only oneÂ  reported case so far of a feminist aborting their baby because it was a boy and that case is unconfirmed. Yet, the important part of that is “reported.” We’ve no real idea how many feminists have killed off their own unborn children because they were going to have a son and they believe all men are sexual predators.

Frankly, I wouldn’t be that surprised if this were far more common than we’ve been given evidence of.Â  Given the reasoning of Feminists, it even makes a sick sort of sense that they’d prefer to kill their unborn sons – future predators – in an effort to end the “Patriarchy.”

And it’s not as if sex-selection wasn’t a disturbingly common reason for abortion in the first place, at least outside the Civilized World.Â  It’s certainly not unreasonable or illogical to posit that Feminists, who do not value men, would act in similar, if converse, manner to those cultures who do not value women. There’s little behavioral difference, after all, between misogyny and misandry.

This entry was posted on Sunday, October 21st, 2018 at 9:14 am and is filed under Society. You can skip to the end and leave a response. Pinging is currently not allowed.

As is the case with almost all the Bikini Interlude posts, thereâ€™s really no real purpose to this post beyond providing myself and any who come here a brief interlude of beauty and a last taste of these pleasures as the bikini season ends for the year.

The above being said, as July, August, and September are the months when the largest number of women give birth, let’s celebrate the pregkini because pregnant babes are no less hot than non-pregnant ones and they’re probably going to miss next year’s bikini season!

This entry was posted on Sunday, August 30th, 2015 at 7:41 am and is filed under Society. You can skip to the end and leave a response. Pinging is currently not allowed. 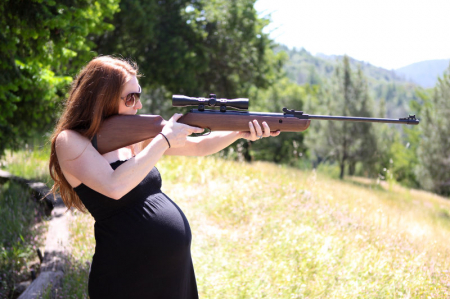 “Boom!” That’s the sound this image evokes. Not, however, the sound of Jenee’s rifle discharging – the sound of Liberals’ and Progressives’ heads exploding when they see the picture.

Renee is White – that’s enough right there to set of some of America’s domestic enemies – married to a US Marine, quite pregnant, and shooting a rifle in the great outdoors.

This picture is almost the perfect poster of what Liberals and Progressives believe is so wrong with America. Of course their heads would be exploding upon looking at it.

This entry was posted on Sunday, August 9th, 2015 at 6:57 am and is filed under Politics, Society. You can skip to the end and leave a response. Pinging is currently not allowed.