It’s a sad fact – but, one not without some humor – that attracting mates, dating them, and proposing to them look a wee bit different under Bidenomics and the Democrat-engineered collapse of the American economy.

This entry was posted on Thursday, January 26th, 2023 at 5:30 am and is filed under Announcements. You can skip to the end and leave a response. Pinging is currently not allowed. 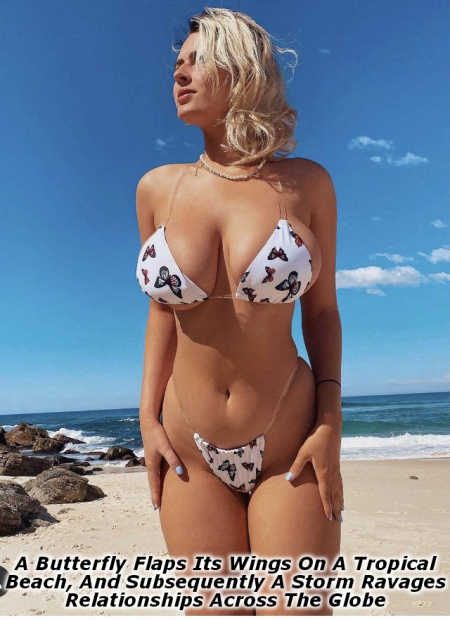 Chaos is perhaps the most overused and misused term in science today. That being said, Gentlemen, we don’t have to understand chaos or the deeper meaning behind the Butterfly Effect. We just have to be aware of- and beware of the problems it can, does, and will cause us in life. 😉

This entry was posted on Wednesday, January 25th, 2023 at 7:30 am and is filed under Humor, Science, Society. You can skip to the end and leave a response. Pinging is currently not allowed.

The Fall Of Man

Most people think that they know what happened in the Garden of Eden and why the Fall of Man happened. Consider though that most people have only heard the tale from the Christians’ bible and then only in modern, translated form. What really caused the Fall of Man might have been a bit different from the mainstream report.

Oh yeah! If one considers ancient Jewish texts, especially the Kabbalah, then Adam was first paired with Lilith, not Eve. Also, Lilith, some time after divorcing herself from Adam, became the 1st Consort of Sama’el, who according to some works was the one who tempted Eve, not the Serpent, who was merely Sama’els mount.

So really, that part of Genesis that depicts the Fall of Man may just be a sanitized description of family drama surrounding a pair of Ex’s and their jealous new spouses. 😆

This entry was posted on Thursday, January 19th, 2023 at 7:00 am and is filed under Humor, Religion. You can skip to the end and leave a response. Pinging is currently not allowed.

Since it’s once again Dr. Martin Luther King Jr. Day, it seems to me to be the most appropriate time to remind all you, my fellow White Men, that Orthocegenation is the best way to reach the goals of equality. Providing Black Women with our children and our support as fathers to those children are actionable affirmations that we are all Americans and all committed to a better, brighter future for those children.

The arc of justice may be long, but we can shorten it. So, do the Right, White thing and include Black women in your reproductive choices and, all else being equal, choose them as them as mothers of your children. Indeed, if you accept the need for equity, prioritize your choice of them for motherhood. Remember, by diversifying our fatherhood we spread – dare I say redistribute? – our privilege, thereby reducing the gap between races.

This entry was posted on Monday, January 16th, 2023 at 8:00 am and is filed under Politics, Society. You can skip to the end and leave a response. Pinging is currently not allowed.

Couple’s matching shirts are a long-standing part of American kitsch. Mostly, I find them cringe-worthy. There are, however, exceptions. This idea being a case in point, especially when you’ve decided to no-show a gathering but have to see the people the next day.

Honestly, this couple’s shirts idea is so awesome and awesomely funny, you should pop over to Zazzle and design you and your mate(s) a set. 😉

This entry was posted on Wednesday, December 14th, 2022 at 11:00 am and is filed under Humor. You can skip to the end and leave a response. Pinging is currently not allowed.