This entry was posted on Sunday, December 30th, 2018 at 7:07 am and is filed under 2018 Elections, Politics. You can leave a response, or trackback from your own site.

I’ve made some negative comments about Obama’s desire to provide employment to Jihadis. Amongst other things, I felt they just weren’t employable. In the latter assertion I might have been mistaken. 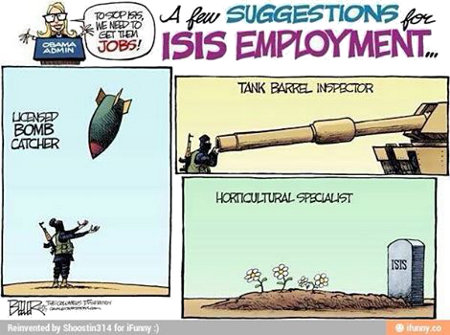 There are jobs that American tax dollars can provide for the problematical Muslims that would solve for the problem that they are efficiently and effectively. Indeed, we should shoot for 100% in the Muslim World in order to end the issue of Radical Islam and terrorism. ðŸ˜‰

I’d also like to point out that, if the Muslims are brought into captivity, they’re also quite employable as pharmaceutical testers. And let’s not forget that they can also replace pig carcasses for testing the terminal performance of small arms munitions.

This entry was posted on Sunday, February 22nd, 2015 at 6:18 am and is filed under Humor, Politics, Religion. You can leave a response, or trackback from your own site.

Take a look at a sampling of them though. Who’d hire them? I can’t see where any amount of economic improvement and increased employment opportunities outside of the suicide bomber marketspace would help them much, if at all. ðŸ˜†

Sometimes referred to as part of Scottish Wisdom and meant with all humor, this blunt statement carries with it a great weight of vastly unpleasant truth.

I think that what humor it evokes is of the “you either have to laugh or cry variety.”

It’s true though; more often than not, the result of helping is man is that he’ll first turn to you the next time he believes that he needs help – and so the cycle of irresponsibility and dependance begins.

This entry was posted on Thursday, September 29th, 2011 at 9:04 am and is filed under Musings, Society. You can leave a response, or trackback from your own site.

The very fact that America is in its current “Debt Crisis” and seeking to, once again, raise it’s own debt ceiling is an example of a willful and utter failure of leadership. Rather than behave responsibly, the politicians in Washington D.C. have chosen to continue to make America reliant upon foreign financial aid and to burden our children and our children’s children with crushing debt owed to foreign powers.

The above was Obama’s stridently voiced opinion when President Bush Jr. was POTUS:

The fact that we are here today to debate raising America’s debt limit is a sign of leadership failure,” he said. “It is a sign that the U.S. Government can’t pay its own bills. It is a sign that we now depend on ongoing financial assistance from foreign countries to finance our Government’s reckless fiscal policies. … Leadership means that ‘the buck stops here.’ Instead, Washington is shifting the burden of bad choices today onto the backs of our children and grandchildren. America has a debt and a failure of leadership. Americans deserve better. I therefore intend to oppose the effort to increase America’s debt limit.

Then-Senator Obama then voted, along with 47 other Senators, against the proposed debt ceiling increase. The joint resolution ended up narrowly passing 52 – 48.

Since then, of course, Obama’s public opinion has rather dramatically reversed. Now he and his coterie seem to feel that not raising the debt ceiling would be a failure of leadership.

In January, 2011 the White House was questioned on this turnabout of position. The response from Obama’s mouthpiece, Robert Gibbs revealed quite a lot about Obama’s “character” and his “positions” on issues.

Asked about that quote – and vote — today, White House press secretary Robert Gibbs said that it was important that “based on the outcome of that vote…the full faith and credit was not in doubt.”

Then-Sen. Obama used the vote “to make a point about needing to get serious about fiscal discipline….His vote was not necessarily needed on that.”

So Obama was against the debt ceiling increase when being so would have no near-term consequences that might affect his chances of keeping his job in the US Senate. One must presume that he is for it now for similar reasons since failing to raise the debt ceiling would definitely have near-term consequences – or so his cabal keep telling us – that would negatively impact his continued employment.

Unsurprisingly, this being an election year, Obama has further “clarified” his position on the matter and no longer believes that even token speeches of dissent or unneeded votes of conscience against raising the debt ceiling are appropriate.

Press secretary Jay Carney said that “the president, as David Plouffe said yesterday, regrets that vote and thinks it was a mistake. He realizes now that raising the debt ceiling is so important to the health of this economy and the global economy that it is not a vote that, even when you are protesting an administration’s policies, you can play around with, and you need to take very seriously the need to raise the debt limit so that the full faith and credit of the United States government is maintained around the globe.”

Don’t mistake either my point or Obama’s position. He was not “against it before he was for it.” His position has always been the same, to be elected and reelected. Obama, the Campaigner-in-Chief has no firmly held positions or agendas beyond that or, at least, none that supersede that self-centered and narcissistic core goal.

Like most Liberals Obama’s ideology falls by the wayside whenever pursuing it would force him to make sacrifices or put his personal circumstances at risk. Sacrifices are things that other people should be forced to make for the “greater good.”