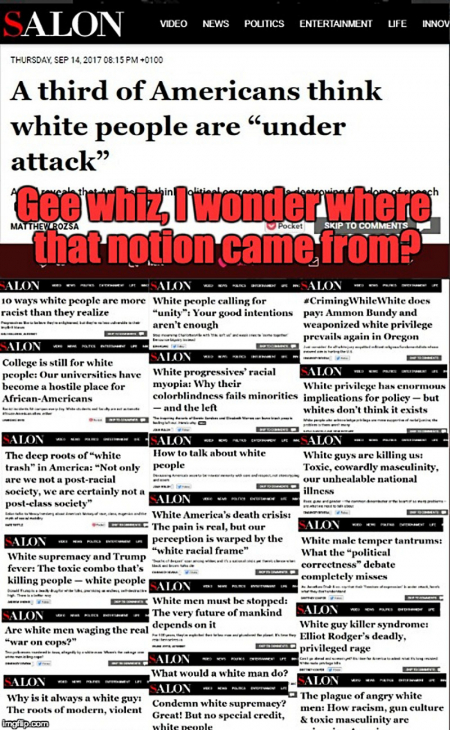 The attack on Whiteness today is not a spare-time hobby of a few nostalgic haters with too much time on their hands. Rather, it is a concertedâ€”often paidâ€”effort to humiliate, invalidate, demonize, and devalue the White community. There is a whole industry that has been constructed around hating White people, staffed by those who have invested immense intellectual and economic resources into making their hatred of Whiteness bear fruit in society. These people do not belong to any one racial group. Not even to any one ethnic, national, or religious group. Rather, they belong to a broad ideological group: Equalitarianism. These people have used their influence and control of information to create a culture of anti-White hatred in society today.

This entry was posted on Sunday, September 13th, 2020 at 5:40 am and is filed under Politics, Society. You can skip to the end and leave a response. Pinging is currently not allowed.

Mr. Ruark certainly spoke a fundamental truth, but, in these degenerate times, it’s a largely irrelevant truth. Those who are called Liberals and/or Progressives and those who they pander to- and enable – essentially the Democrats and their likely voters – find no good at all in America’s customs and traditional way of living. Quite the opposite; they find such things to be abominations and abhorrent to them and the world they would birth.

This entry was posted on Sunday, December 29th, 2019 at 10:03 am and is filed under Society. You can skip to the end and leave a response. Pinging is currently not allowed.

When I See Democrats

There’s the Gods’ honest truth! When I see Democrats caught up in their dystopian fantasies, screaming about President Trump, American society and culture mores, or just Whites in general, all I see is a bunch of primitive, feral savages from some culture that is not understandable by me, being so alien to any of those in the Civilized World.

And no; this isn’t a case of my “othering” the enemy. The Democrats and those demographics most likely to side with them are the ones that “othered” themselves, proudly declaring that they would not be like or as part of the society of the nation they despise, America.

This entry was posted on Friday, November 29th, 2019 at 7:40 am and is filed under Politics. You can skip to the end and leave a response. Pinging is currently not allowed.

This entry was posted on Friday, June 26th, 2015 at 10:11 am and is filed under Politics, Society. You can skip to the end and leave a response. Pinging is currently not allowed.