Once upon a time, long, long ago, in a nation far, far away from what is left of America of today, a POTUS admonished Americans to, “Ask not what your country can do for you- ask what you can do for your country.”

The intervening 50 years since President Kennedy issued those words have seen his bold admonishment not only ignored, but repudiated and spat upon. 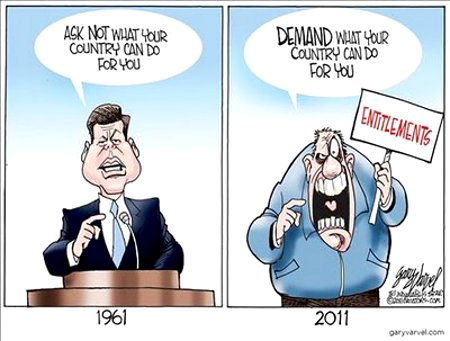 Ask Not What Your Country Can Do For You…Demand It!

Four decades of moral decline has left America filled with people who are not concerned about asking themselves how they can help the nation they’re supposedly loyal to, have past the point in decline where they instead ask what the nation can do for them, and now demand that the nation do for them what they should be doing for themselves.

Bread and Circuses is the cancer of democracy, the fatal disease for which there is no cure. Democracy often works beautifully at first. But once a state extends the franchise to every warm body, be he producer or parasite, that day marks the beginning of the end of the state. For when the plebs discover that they can vote themselves bread and circuses without limit and that the productive members of the body politic cannot stop them, they will do so, until the state bleeds to death, or in its weakened condition the state succumbs to an invader–the barbarians enter Rome.

— Lazarus Long aka Woodrow Wilson Smith
To Sail Beyond the Sunset

Nor is this cancerous growth of the entitlement society limited to those stridently ranting masses of eaters and looters seeking a welfare state. The heads of corporations who should be the leaders of the productive members of society are no better. Their demands for subsidies and bail outs to make up their many failings are just entitlements and welfare under a different name.

This societal cancer is nothing new and is one of the most common reason for any state throughout history to have failed. Even Rome, the greatest empire in human history succumbed to it, though it took over 4 centuries to do so.

I truly fear that, without a bloody and painful reversal of course, America’s decline and fall will be measured in decades, not centuries.

This entry was posted on Friday, April 1st, 2011 at 9:59 am and is filed under Politics, Society. You can skip to the end and leave a response. Pinging is currently not allowed.