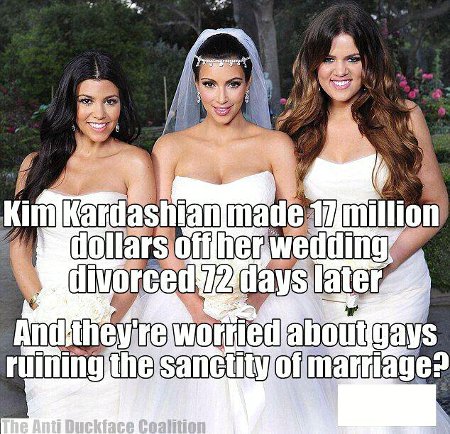 Truth in Media, or at least classic television? Quite possibly. American television was a lot different in the mid-1960s when ABC created and aired The Addams Family.

I ask all those who are against gay marriage because “it will weaken the family” or “destroy traditional marriage” is this what you’re really afraid of? Are you actually just terrified that the queers will manage to do better than our – straights, that is – 50% success rate at having solid marriages – or at least ones that don’t end in divorce?

Come on. There are plenty of valid reasons to fight against the gay marriage laws that they have passed and continue to try to pass in various states. Most were either designed to infringe upon the religious freedoms and freedom of association of various Christian groups or were twisted by queers and the Liberals into doing so. But…it’ll destroy traditional marriage and the sanctity thereof? Please!

This entry was posted on Friday, October 23rd, 2009 at 8:31 am and is filed under Humor, Society. You can skip to the end and leave a response. Pinging is currently not allowed.

Today, May 26, 2009, the California Supreme Court, in a 6-1 decision, upheld Prop 8. This is amazing news for fans of democracy, but a brutal defeat for queers and LGBT activists and organizers.

California voters legally outlawed same-sex marriage when they approved Proposition 8 in November, but the constitutional amendment did not dissolve the unions of 18,000 gay and lesbian couples who wed before the measure took effect, the state Supreme Court ruled today.

The 6-1 decision was issued by the same court that declared a year ago that a state law defining marriage as the union of a man and a woman violated the right to choose one’s spouse and discriminated on the basis of sexual orientation.

Prop. 8 undid that ruling. The author of last year’s 4-3 decision, Chief Justice Ronald George, said today that the voters were within their rights to approve a constitutional amendment redefining marriage to include only male-female couples.

The actual issue before the justices was whether the voters’ had the power to amend the California State Constitution by initiative, or whether – as the homosexuals and their supporters claimed – Prop 8 legally required a two-thirds legislative vote or approval from delegates at a state constitutional convention in order to have reached the November, 2008 ballot.

It’s rather shocking that the California court didn’t fall victim to judicial activism and actually held firmly to the law and to the merits of the case before them, which was Strauss vs. Horton, S168047.

In addressing the issues now presented in the third chapter of this narrative, it is important at the outset to emphasize a number of significant points. First, as explained in the Marriage Cases, supra, 43 Cal.4th at page 780, our task in the present proceeding is not to determine whether the provision at issue is wise or sound as a matter of policy or whether we, as individuals, believe it should be a part of the California Constitution. Regardless of our views as individuals on this question of policy, we recognize as judges and as a court our responsibility to confine our consideration to a determination of the constitutional validity and legal effect of the measure in question. It bears emphasis in this regard that our role is limited to interpreting and applying the principles and rules embodied in the California Constitution, setting aside our own personal beliefs and values.

I would suggest to those who favor and/or support same-sex marriage that they gather signatures on petitions and submit them to the California Legislature so that a Constitutional amendment or revision redefining marriage as to be something other than merely “one man and one woman” can be brought to referendum vote in the next few years.

This entry was posted on Tuesday, May 26th, 2009 at 2:17 pm and is filed under Politics, Society. You can skip to the end and leave a response. Pinging is currently not allowed.

On November 4th, 2008. the voters in California voted in favor of Proposition 8 – by a reasonably slim 52.3% to 47.7% margin – which amended the California State Constitution to include verbiage that strictly defined marriage as a union between one man and one woman.

Only marriage between a man and a woman is valid or recognized in California.

Thus Proposition 8 overruled the May 15, 2008 decision by the California Supreme Court that ruled that the previous Proposition 22 – which passed with 61.4% of the vote – violated the equal protection clause of the California Constitution. As a result Gay Marriage was once again forbidden in California.

As anyone with a brain would expect, the LGBT community and its supporters are very much up in arms over this development. There are holding protests across the whole nation and proceeding to move forward with litigation to have the constitutional amendment overruled. The LGBT community is outraged that the voters of California took their rights away twice!

One has to ask though what rights did the homosexual lose? The answer is not a single one under California law.  California recognizes both hetero- and homosexual Domestic Partnerships, which as of 2007 grant all of the same rights and responsibilities as marriages under CA state law (see California Family Code §297.5)

Registered domestic partners shall have the same rights, protections, and benefits, and shall be subject to the same responsibilities, obligations, and duties under law, whether they derive from statutes, administrative regulations, court rules, government policies, common law, or any other provisions or sources of law, as are granted to and imposed upon spouses.

The first thought that came to mind was that these Domestic Partnerships wouldn’t make the participants eligible for the same federal programs and protections granted to married couples. This is actually true, but is sadly irrelevant. The federal Defense of Marriage Act (DOMA), which President Bill Clinton signed into law on September 21, 1996 expressly states that the Federal Government may not treat same-sex relationships as marriages for any purpose, even if concluded or recognized by one of the states. Whether married or partnered, same-sex couples are denied federal recognition.

So it comes down to language and the weight that people place on the word “Marriage.” Homosexuals weren’t interested in their rights, which weren’t in jeopardy. The outrage caused by Prop 8 is seemingly based on the gay community’s need to have the California government say that they have the “right” to say that they’re married.

Essentially the LGBT community tried to legislate and litigate acceptance and got “slapped in the face” by homophobia. They also – I hope but do not conclude unwittingly – ran afoul of Christian churches who are experiencing an increased fear of government interference.

Someday people will hopefully learn that you cannot legislate or litigate aceeptance, only enforced tolerance and equality of measurable and substansive rights under the law of the land.  It won’t be today though or next week – or next year.

This entry was posted on Tuesday, November 11th, 2008 at 5:58 pm and is filed under Politics, Society. You can skip to the end and leave a response. Pinging is currently not allowed.