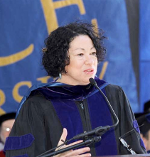 On Tuesday, May 26, 2009 President Obama announced his first appointee to the US Supreme Court, US Appellate Court Judge Sonia Sotomayor. As anyone would expect, the debate over Judge Sotomayer’s qualifications followed immediately upon the heels of the announcement.

Sadly, the debate is distinctly lopsided with each side putting forth different points in the argument instead of arguing the merits of the same points.

A lot of the talking points in the debate that are coming from the Liberals and their pet media have much to do with realpolitik and social engineering and very little to with any valid qualification for any job, much less a Supreme Court Justice. None the less, these trivialities or irrelevancies are important because Sotomayer’s appointment is far more about the politics of the Legislature than it is about the law or the SCOTUS.

Sotomayor was born in the South Bronx and grew up the Bronxdale Houses housing project and then to moved to Co-op City. Her father, Juan Sotomayor, who died when Sonia Sotomayor was nine, was a tool-and-die worker with a third-grade education who did not speak English. Her mother, Celina Sotomayor, was a nurse.

Despite her economic woes as a child, Sotomayor managed to graduate from Princeton University (BA) and later from Yale Law School (JD).

That’s a very touching and heartwarming tale. If Horatio Alger had ever written a rags-to-riches story featuring a Latina protagonist, I’m sure that the character would have had much in common with Judge Sotamayor. It also plays very well with the press and fits nicely with President Obama’s politics of class warfare. The poor being rejected and denied an opportunity by the evil rich is always a useful political ploy for the Liberals.

However, Sotomayor’s upbringing has little or nothing to do with her capabilities in- and proclivities towards jurisprudence and Constitutional law.  The last I checked, neither poverty at birth nor wealth at birth were hard and fast prerequisites for knowledge of the law. The phrase, “All Men Are Created Equal” cuts in both directions without discrimination.

Sonia Sotomayor was diagnosed with Type I diabetes at age eight.  Since then she has been insulin-dependent.

Sotomayer’s perseverance in the face of a debilitating disease is certainly inspirational, especially for other sufferers of the affliction. Much like her upbringing, it’s great fodder for the press and great political capital. It will be easy for the Liberals to spin any attack against Sotomayor’s appointment as being a de facto attack against the hopes, dreams, and aspirations of the many children growing up with Type I diabetes.

Appointing a person with diabetes to the SCOTUS is also a useful means for further painting any Republicans who argue against Sotomayor’s appointment as being against healthcare, the socialization of which is a key plank in President Obama’s platform.

With the very remotely possible exception of Asperger’s Syndrome, I cannot think of any positive effect a chronic disease would have on Judge Sotomayer’s ability to understand and interpret US laws and the US Constitution. Inversely, Type I Diabetes is very easily managed with modern medicine and has few serious negative impacts on personality or cognition, so Judge Sotomayor’s affliction has no negative effect upon Judge Sotomayer’s abilities as a SCOTUS Justice.

Sotomayor Is A Woman

Judge Sotomayor was born female. She has chosen to retain her gender throughout her life to date.

Politically speaking this has a lot of value in the appointment process. Women are a slight majority in the US population very large voting block. The GOP has always been somewhat weak in its appeal to female voters, so appointing a woman to the SCOTUS is a decently effective political wedge to drive between the Republican Party and the female voters.

President Obama, after the rampant, virulent, and ongoing  misogyny that was evidenced during his Democratic Primary campaign against Sen. Hillary Clinton, also needs to make visible strides towards gender equality in his administration in general and his political appointments in specific. Judge Sotomayor is very useful in that capacity.

Practically speaking, however, men and women have equal capacities for understanding the law and the US Constitution. Judge Sotomayor’s gender has no impact, despite her own assertion to the contrary,  in her actual ability to be a SCOTUS Justice. If her gender does, due to her own subjective feelings and agenda, have an impact on her abilities it would be, by necessity, a negative impact.

Sotomayer Would Be the 1st Hispanic SCOTUS Justice

Judge Sonia Sotomayor is Hispanic, a Latina in common parlance. In point of fact she is Puerto Rican (Boricua) and English was her second language, one she did not start becoming fluent in until after her father died. While she was born in New York, her mother and father were both born in Puerto Rico – her father in the Santurce area of San Juan and her mother in the Santa Rosa area of Laja.

Appointing a Hispanic to the SCOTUS is politically important for several reasons. It allows President Obama to transcend the divide between the Black and Hispanic worlds of racial politics, thereby increasing the attractiveness of the Democrats to Hispanic voters, a minority group that the Dems have not successfully wooed as of yet. It also makes it easy to paint the GOP as standing in the way of the nomination of The First Latina SCOTUS Justice.  This would, they hope, create a schism between the GOP and the Hispanics, the one minority group that the GOP has previously done well with.

Alright, breaking barriers, especially racial barriers, is a good thing, and the The First Latina SCOTUS Justice certainly makes a compelling and inspirational headline; I’m sure Hispanics appreciate the thought. Race has, however, no bearing on the ability of a person, Sotomayor in this case, to interpret US law and the Constitution in an intelligent and objective fashion.

There is no denying that Judge Sotomayor is a compelling figure. She has media potential that few in politics can equal, possibly second only to President Obama himself. Yet the Liberals’ and their media’s emphasis on her upbringing, illness, gender, and race seems to be nothing but political ploys that are focused more on weakening the GOP in the upcoming 2010 House and Senate elections than on affecting the makeup of the Supreme Court’s bench.

These so-called qualifications and talking points certainly are all irrelevant to Sotomayor’s worthiness to be a US Supreme Court Justice, or a waitress – or to hold any other job I can think of with the exception of actress.

This entry was posted on Wednesday, May 27th, 2009 at 4:23 pm and is filed under Politics. You can leave a response, or trackback from your own site.