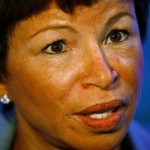 Valerie Jarrett, co-chair of Barack Obama’s Transition Team was interviewed by Tom Brokaw on Meet the Press this weekend (November 9th, 2008) and she discussed her views on the transition from the Bush presidency to the Obama presidency.

Let me politely say that some of her words on the topic of Obama’s presidency were unfortunate.

YouTube excerpt from Valerie Jarrett’s interview on Meet the Press on November 9, 2008:

I must say that I’m not particularly pleased with the attitude displayed by Jarrett in regards to how Obama should proceed with his administration. I’m not alone either. Various Conservatives and Constitutionalists are already jumping on Jarrett’s gaffe as being a harbinger of the dictatorial excesses to come from President Obama. Much like Rahm Emanuel’s appointment as Chief of Staff, Valerie Jarrett’s gaffe – already being called a Freudian slip by some – does not bode well.

However, given the daunting challenges that we face, it’s important that president elect Obama is prepared to really take power and begin to rule day one.

To be fair, there is no evidence so far that President-Elect Barack Obama harbors any delusions of being either able or allowed to rule as opposed to govern, serve, and administrate. Jarrett’s words and possible views should not be granted more weight than they deserve.

I believe that what should be of primary concern is that such views as “take power and rule” intimate show a certain type and level of expectations that are being placed upon Obama by his advisers, backers, and supporters. Many people crave “Change” as was proved by the recent elections. Obama may have trouble meeting their expectations while operating within the constitutionally bound powers of the Presidency.

Some secondary concern should be given to the idea of Obama at least maintaining a semblance of humility and bipartisanship in the wake of such a bitterly contested election. Neither Emanuel’s appointment or Jarrett’s comments show any such semblance and serve only to entrench the Right and further fuel the Left’s expectations of “payback.”

This entry was posted on Monday, November 10th, 2008 at 12:11 pm and is filed under Politics. You can skip to the end and leave a response. Pinging is currently not allowed.

9 Responses to “Take Power And Rule”