Bill Watterson’s Calvin and Hobbes has always been a source of rare and somewhat underrecognized wisdom. This quick cartoon is a perfect example of the subtle lessons Mr. Watterson taught. I would call it a lesson in Adulting Childhood or Childing Adulthood.

Perhaps we as a culture were and are too fond of and yet, at the same time, to ignorant of the meaning in 1 Corinthians 13:11. Perhaps we, to our harm, put away the childlike alongside the childish. We seem to listen to our minds while ignoring our hearts’ and souls’ exhortations to find and appreciate the wonders big and small that abound in Creation.

This entry was posted on Saturday, January 7th, 2023 at 5:30 am and is filed under Philosophy, Society. You can skip to the end and leave a response. Pinging is currently not allowed.

Congratulations to all those born between the 1930’s and early 1980’s! You seem to have won the temporal-genetic lottery, having been born in the right times.

First off, you survived being born to mothers who smoked and/or drank while they carried you. They took aspirin, ate blue cheese dressing, tuna from a tin, and didn’t get tested for diabetes.

Then, after that trauma, your baby cots were covered with bright colored lead-based paints. You had no childproof lids on medicine bottles, doors or cabinets and when you rode your bikes, you had no helmets – not to mention, the risks you took hitchhiking. As children, you would ride in cars with no seat belts or air bags. Riding in the back of a van or pickup truck – loose – was always great fun. You drank water from the garden hosepipe, not from a bottle. You shared one soft drink with four friends, from one bottle and no one actually died from this. You ate cakes, white bread and real butter, and drank pop with sugar in it, but you weren’t overweight because…… YOU WERE ALWAYS OUTSIDE PLAYING!!

You would leave home in the morning and play all day, as long as you were back when the streetlights came on. No one was able to reach you all day. And you were OK. You would spend hours building your go-carts out of scraps and then ride down the hill, only to find out you forgot the brakes. After running into the bushes a few times, you learned to solve the problem .

You did not have Playstations, Nintendo’s, X-boxes, no video games at all; no 99+ channels on cable; no video tape movies; no surround sound; no mobile phones; no text messaging; no personal computers; no Internet or Internet chat rooms……….YOU HAD FRIENDS and you went outside and found them!

You fell out of trees, got cut, broke bones and teeth and there were no lawsuits from these accidents you played with worms (well most boys did) and mud pies made from dirt, and the worms did not live in us forever. You made up games with sticks and tennis balls and although you were told it would happen, you did not poke out any eyes. You rode bikes or walked to a friend’s house and knocked on the door or rang the bell, or just yelled for them!

Local teams had tryouts and not everyone made the team. Those who didn’t had to learn to deal with disappointment. Imagine that! The idea of a parent bailing you out if you broke the law was unheard of. They actually sided with the law!

These generations have produced some of the best risk-takers, problem solvers and inventors ever! The past 50 years have been an explosion of innovation and new ideas. You had freedom, failure, success and responsibility, and you learned HOW TO DEAL WITH IT ALL! And YOU are one of them! CONGRATULATIONS!

You might want to share this with others who have had the luck to grow up as kids, before the lawyers and the government regulated our lives for what they claim is our own good. And while you are at it, forward it to your kids so they will know how brave their parents were.

This entry was posted on Thursday, February 19th, 2015 at 6:27 am and is filed under Humor, Society. You can skip to the end and leave a response. Pinging is currently not allowed.

Somehow the young Obama made it into Hawaii’s elite Punahou School, perhaps on his own merits and perhaps in an attempt by Punahou to show they valued “diversity” – while still maintaining their long tradition of “Kanaka Need Not Apply.” We’ll never know for certain. 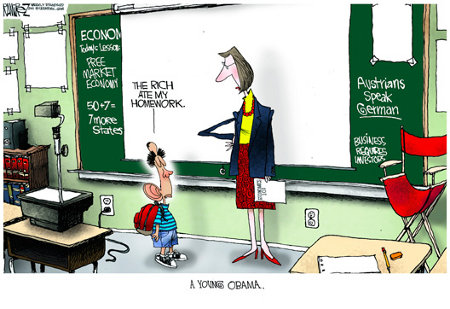 This entry was posted on Saturday, March 10th, 2012 at 8:41 am and is filed under Humor, Politics. You can skip to the end and leave a response. Pinging is currently not allowed.