This election stinks! The 2012 Presidential election is essentially a party line vote and predicated more upon party loyalty than anything else – and that is no way to do things. 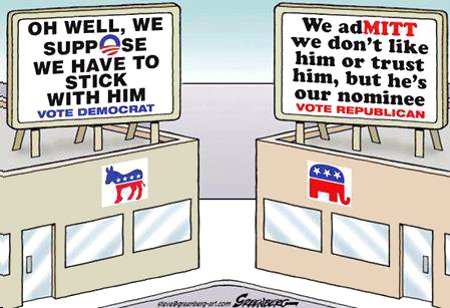 Obama Or Romney? Some Choice.

I, for one, would have preferred a better set of choices – or, at least, a real choice – but the Establishment and Lamestream Media prevent that coming to pass – as the nature of the Republican Primary debates clearly showed.

Ah well…Like all Americans, I’ll hold my nose and try to vote Obama out – but I’ll keeps stocking up on ammo and other needful supplies.