Moon-Moon, originally depicted as a mentally stunted wolf and later often as a husky, always seem a bit strange. Now, however, the origin of this madness has been explained.

This entry was posted on Thursday, March 25th, 2021 at 6:27 am and is filed under Humor. You can skip to the end and leave a response. Pinging is currently not allowed.

This entry was posted on Wednesday, January 10th, 2018 at 12:32 pm and is filed under Politics. You can leave a response, or trackback from your own site.

, is exactly what most Americans would expect it be after reading the title or seeing the cover of the book. It’s a well-crafted and articulate piece of extreme race-baiting and grievance-mongering that totally and utterly ignores reality, the antisocial, criminal, and self-destructive behaviors of the “Black Community,” and the negative consequences they suffer as a direct result of those behaviors.

The New Jim Crow is one those uncommon situation where one can judge a book by its cover.

In The New Jim Crow, Alexander systematically argues that America’s judicial system “operates as a tightly networked system of laws, policies, customs, and institutions that operate collectively to ensure the subordinate status of a group defined largely by race.” The War on Drugs, she contends, has created “a lower caste of individuals who are permanently barred by law and custom from mainstream society.” Mass incarceration, and the disabilities that come with the label “felon,” serve, metaphorically, as the new Jim Crow. She further posits that ŌĆ£Race plays a major role-indeed, a defining role ŌĆō in the current system, but not because of what is commonly understood as old-fashioned, hostile bigotry. This system of control depends far more on racial indifference (defined as a lack of compassion and caring about race and racial groups) than racial hostility ŌĆō a feature it actually shares with its predecessors.ŌĆØ

The underlying flaw in her work and her thesis is that Mrs. Alexander willfully ignored the reality that Blacks per capita commit far more crimes than any other cultural group in America. If they being wholesale disenfranchised, and they are, it’s by their own devices and not due to any Jim Crow-esque government conspiracy of control over their population. She, like most race-baiters, Black apologists, and purveyors of “Social Justice,” always seem to see the enactment and enforcement of laws as a “lack of compassion and caring about race and racial groups” when Blacks, due to their apparent propensity for criminality, are disproportionately impacted by those laws.

To follow Alexander’s logic to it’s natural conclusion we would have to declare all laws pertaining to violent crime – except, of course, any instance where the crime is White-on-Black – as racist and strike them from the books as Blacks commit approx. 50% of the violent crimes in the US despite being only 13% of the population.

However, I will without reservation concede one critical point to the author.┬Ā The sentencing disparity between crack and powder cocaine has been proven to serve no purpose and to have been a reactionary measure that needs to properly reach its sunset.

Contrary to what one might expect, I do suggest that Americans read Michell Alexander’s work. The New Jim Crow is very well written and researched. Because it is so and because it shows exactly how professional race-baiters will match facts to their own agendas, biases, and false postulates, its an important work for Americans to read.

This entry was posted on Monday, September 2nd, 2013 at 10:07 am and is filed under Books & Reading, Politics, Society. You can leave a response, or trackback from your own site.

Are you or someone you know a bad medicine addict? If so, there is hope. 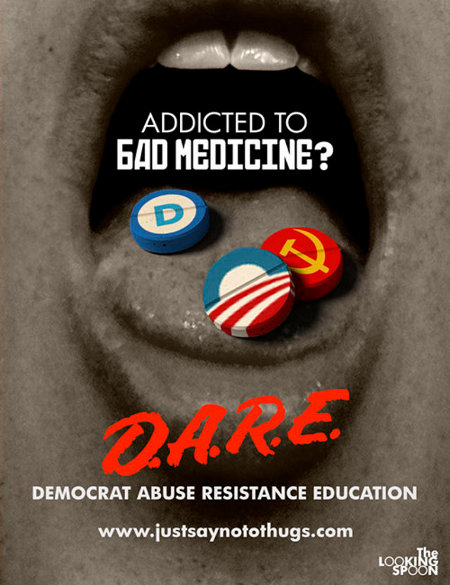 Democrat Abuse Resistance Education (D.A.R.E.) can help you help yourself get your life, dignity, and soul back. Just say no to thugs.

This entry was posted on Monday, January 14th, 2013 at 9:36 am and is filed under Humor, Politics. You can leave a response, or trackback from your own site.

OMFG! A Nearby Rifle

Some deranged or drug-addled freak in San Jose, one Coco Bennett, decided to strip naked near the VTA station and brandished a “samurai” sword at the responding police officers. OK, there’s a naked vermin with a sword and what is the first thing the local CBS affiliate has to say about it?

SAN JOSE (CBS SF) Ś A man with an assault rifle in his car removed his clothes and brandished a Samurai sword at police in west San Jose for more than two hours before he was arrested while trying to flee, a San Jose police spokesman said.

That’s the mouthpieces of the anti-American Left for you. Some mentally deficient scum get buck naked and threatens the police with a sword saying, “YouÆre going to have to kill me” and starting a two-hour stand-off with law enforcement and the first thing that the MSM has to say about the whole debacle is that the police recovered an “assault rifle” from his pickup truck. ­¤Öä

Even the patently false title of their article, “Naked Man Confronts San Jose Police With Sword, Assault Rifle” makes it clear that these domestic enemies want people to focus on the nearby “AR-15 style” rifle, even though Bennett didn’t use it or have it in his possession during the altercation.

I truly believe that America would be far better served by our placing “sensible restrictions and prohibitions” on the Free Press than upon firearm ownership. If nothing else, recent elections have proven that the Free Press murders far, far, far more people than all the firearms ever forged have throughout history.

This entry was posted on Wednesday, January 2nd, 2013 at 9:26 am and is filed under Politics, Society. You can leave a response, or trackback from your own site.