Certain sorts are complaining that underrepresented minority (URM) – yes, that’s now a term in college circles – students are facing invisible barriers in public colleges which prevent them from getting or completing the degrees that they want. And those invisible barriers are grades. And this, of course, is racist and needs to be addressed.

Let’s start with the fact that minorities are most likely not underrepresented, if enrollment figures have maintained the rates that they had for a long time. A five-year average showed that 4.98% of Whites, 6.22% of Blacks, and 4.1% of Latinos enrolled in college each year. So, that pretty much throws the Underrepresented Minority (URM) into the trash heap where all such lies belong.

But that “invisible barrier” to minority students is hardly invisible at all. It’s in plain sight, like all or most actual scholastic requirements in colleges, especially large public universities. They do gate off popular majors, limiting them out of necessity to those students with the best GPAs in prerequisite courses for those respective majors. These grade requirements conserve the various departments’ limited resources by acting as a winnowing tool, which makes sure that the strongest students enter those majors and lower-performing students are directed to other majors that the universities’ faculties believe they can better handle.

“I got in here,” she [Gonzales] told me this summer, which she spent finishing her degree in a different major. “I did the application. I did the essays. I was accepted. But then there was another admissions process I didn’t even know about. It was like running a race with one leg.”

It’s quite simple really. When competing for resources, those who can show that they will make the best use of those resources will gain them and those that don’t show that won’t get them. If minorities can’t successfully compete – a falsehood, judging by UC Berkely’s graduates demographic figures – it’s neither the universities faults nor their “problem” to solve.

Most certainly, the growing trend of using “holistic” means of judging a major candidates’ worthiness to claim one of the seats in a college/major, is not a means that provides true benefit. It just ends up lowering the bar, but only for certain classes of applicant.

This entry was posted on Thursday, September 22nd, 2022 at 5:00 am and is filed under Society. You can skip to the end and leave a response. Pinging is currently not allowed.

That's What I Do

Yes. That’s what I do. I read books of all sorts. I drink coffee in what most would consider improperly copious amounts. And I know things, things both sublime and uplifting and things dark, noisome, and soul-staining.

This entry was posted on Wednesday, August 3rd, 2022 at 5:00 am and is filed under Books & Reading, Coffee & Tea, Humor. You can skip to the end and leave a response. Pinging is currently not allowed.

Making Their Own Choices 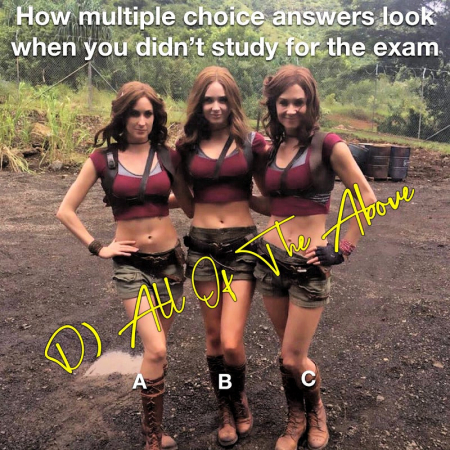 Remember, the most basic and pernicious form of what passes for our school system’s indoctrination of America’s youth is their deliberate miseducation of choices. They always present a limited set of “correct” answers, and they always expect and demand that students abide by these limitations.

Teach your children, especially your sons, to reject this tyranny and to choose what and/or what set of answers are right for them.

This entry was posted on Tuesday, July 12th, 2022 at 8:00 am and is filed under Humor, Society. You can skip to the end and leave a response. Pinging is currently not allowed.

Not Going To End Well

I’ve no evidence to support – and I looked as best as I could, but there’s very little information available on Chinese curricula – and tend to disbelieve that Chinese 3rd Graders are being taught multi-variable calculus, but Mrs. Paul’s point is still very well-made and shouldn’t be discounted because of what was most likely deliberate hyperbole.

Chinese students of all ages are taught core skills needed to succeed, as well as patriotism – though we obviously and rightly don’t like the latter in China case. They’re not being taught that “make a guess about whether the baby is a boy or girl.” And I very highly doubt that they’re having or will ever have regular “story time” with Drag Queens.

Chinese student are also not being taught that there are only two types of people in China, Oppressors and Oppressed. Whereas, more and more, what passes for schools and teachers in America are teaching exactly that from K-12, with the Oppressors being Whites and the Oppressed being everyone else who isn’t White.

And this isn’t in the long run going to end well for us. When China – and a lot of other nations – are both more committed to teaching the next generations what they need to know while those in our schools are committed to teaching the next generations so much that is both wrong and harmful, the future of our nation is bleak indeed.

This entry was posted on Thursday, July 7th, 2022 at 5:31 am and is filed under Politics, Society. You can skip to the end and leave a response. Pinging is currently not allowed.

Sex and sexuality are, for the most part, subjects best taught to children at home by their parents. And that is a large part of why Liberals keep trying to force it into K-12 curricula.

This entry was posted on Sunday, May 15th, 2022 at 7:42 am and is filed under Announcements. You can skip to the end and leave a response. Pinging is currently not allowed.