The American military, and the respective military forces of much of the Civilized World, is making strides to “upgrade” their arsenal of ordnance, weaponry and delivery platforms to meet society’s new “Green” agenda. 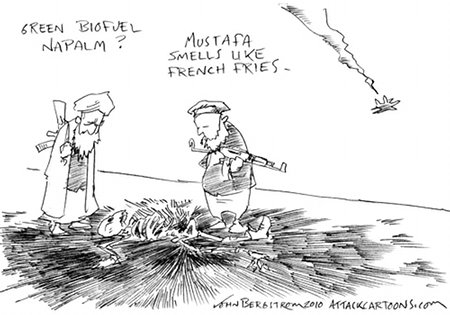 I Love The Smell Of Napalm In The Morning;
It Smells Like … French Fries?

This will, of course, have some largely unexpected and probably disturbing consequences. 😉

This entry was posted on Monday, April 12th, 2010 at 8:37 am and is filed under Humor, Politics. You can skip to the end and leave a response. Pinging is currently not allowed.

END_OF_DOCUMENT_TOKEN_TO_BE_REPLACED

Bob Teixeira decided it was time to take a stand against U.S. dependence on foreign oil. His reward from a state that heavily promotes alternative fuels: a $1,000 fine last month for not paying motor fuel taxes. He’s been told to expect another $1,000 fine from the federal government. And to legally use veggie oil, state officials told him, he would have to first post a $2,500 bond.

The state of North Carolina has decided that they prefer the $1.2 billion annual revenue from gas taxes over freedom from foreign oil or environmental concerns.

This entry was posted on Wednesday, June 13th, 2007 at 4:28 pm and is filed under Politics, The Environment. You can skip to the end and leave a response. Pinging is currently not allowed.