It’s been a recent trend in television to air television shows which are pure fantasy but which are produced in a manner as if they were a documentary or a piece of investigative reporting. It’s an interesting and, admittedly, engrossing technique for presenting what would otherwise be received with scorn and derision.

While this is certainly a laudable method of providing entertainment to the viewing public, it’s had some very unfortunate bleed over into other areas of the American media. 😉 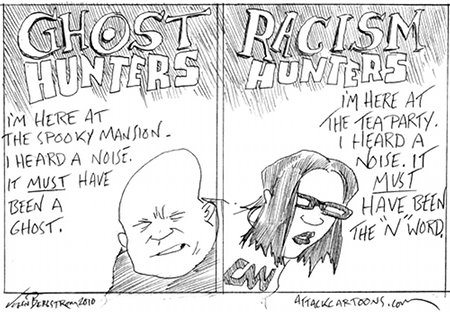 I Heard A Noise. It Must Have Been The “N” Word

Yeah; it’s pretty much just like that. If President Obama, the Liberals, and the collaborators in the Leftist MSM don’t have a valid argument against the American people’s complaints, they’ll just take advantage of Obama’s mixed-blood heritage and invent racist phantasmagoria.

This entry was posted on Monday, April 12th, 2010 at 5:57 am and is filed under Humor, Politics. You can skip to the end and leave a response. Pinging is currently not allowed.