While I still maintain that the greatest danger that Creepy Uncle Joe “Bad Hands” Biden poses to America and the world is that he’ll start a devastating a disastrous war by accident, the existential risk that he’s going to do so deliberately cannot be overlooked. In his rotted-out, dementia-addled mind, he and the the American people are already at war. He actually is already at war with Russia and is sure that we are as well.

He actually even says it weekly, if not daily. Anytime he speaks of inflation, especially energy and/or fuel costs, he says we’re at war or these are times of war with Russia. Time and time again, he’s said this and will likely continue to do so because, in what’s left of his mind it’s true.

But remember, Biden was born during WW2 and literally grew up in and into the nadir of the Cold War. All of his formative years were based upon Russia being and existential threat and global military force being the last, best deterrent for- and force against Russia. And, with his declining mental faculties, I really don’t believe that he can understand that the world has changed.

And that, my Fellow Americans, is more than a little scary. This isn’t just or exactly saber rattling to act the strong man on the world’s stage; that would be both normal under these conditions and not a bad thing at all. This is looking at the American people and key American business sectors and saying that we are at war already and all need to behave that way. That is how you actually start a war as any student of history can tell you.

Yeah, in my opinion, the senile dodderer inhabiting the White House “missed out” on the “great” war against Russia he was promised for the 44 years since he was 4 years old. It also doesn’t get a lot better if my opinion of Biden’s mental state is inaccurate. This is because the only sane reason for his war talk is to lay the groundwork for- or threaten using various codicils of the War Powers Act and Defense Production Act to turn America into a Command Economy, with the Federal Government taking control of production in most or all key sectors thereof.

Biden’s at war. Whether it’s against Russia, as is likely given the presentation of his symptoms, or against America’s free, capitalist economy, is unknown. The first cure for either though is to use the 2022 and 2024 elections to remove him and his enablers from power and restore the greatness and security of America to her People.

This entry was posted on Tuesday, July 5th, 2022 at 8:47 am and is filed under 2022 Elections, 2024 Elections, Politics. You can skip to the end and leave a response. Pinging is currently not allowed.

With the growing or soon to be growing troubles in Eastern Europe, I’ve decided to take some basic precautions against the immediate effects of WW3. Hence, I’ve ordered a time-proven bomb shelter. 😉

This entry was posted on Sunday, March 6th, 2022 at 9:15 am and is filed under Humor. You can skip to the end and leave a response. Pinging is currently not allowed. 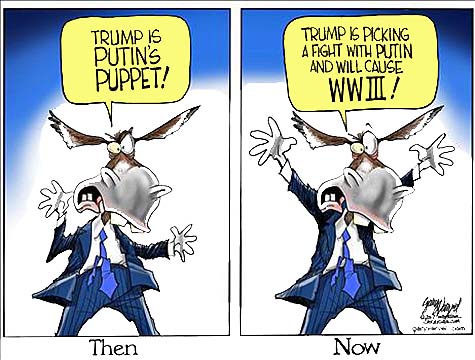 This entry was posted on Monday, April 17th, 2017 at 7:33 am and is filed under Ethics & Morality, Politics. You can skip to the end and leave a response. Pinging is currently not allowed.