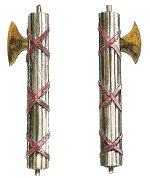 This entry was posted on Sunday, April 27th, 2014 at 9:13 am and is filed under Humor, Politics. You can skip to the end and leave a response. Pinging is currently not allowed. 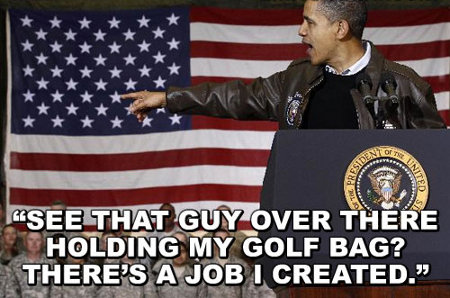 Obama – I Did So Create Jobs!

Never let it be said that Obama hasn’t created jobs or that some of those jobs were actually in America.

In fact, with his and his family’s penchant for vacationing, the boy is doing his best to keep the service sector alive and above water in these troubled days when most American families are being forced to curtail their vacations. Of course all that golf and all those vacations were probably required as part of his campaign financing deal with the SEIU…

This entry was posted on Sunday, December 18th, 2011 at 10:32 am and is filed under Humor, Politics. You can skip to the end and leave a response. Pinging is currently not allowed. 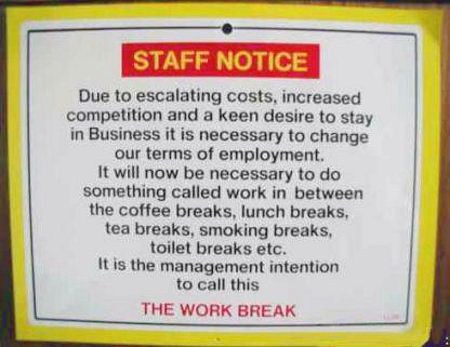 The ranting Liberals and the wailing and jabbering minorities who serve as their political sharecroppers are ever-eager to shout that any problem that Americans have with President Obama and his agenda is based solely or largely upon racism – a term that they cannot even properly define. These enemies of America are, of course, wrong in the vast majority of instances. Very little of the opposition to America’s First Black President is based upon the race he identifies as being part of.

The vast bulk of the opposition to President Obama is that the majority of Americans – including a growing number of those duped into voting for him and now suffering well-deserved “buyer’s remorse” – is actually an opposition to his Leftist agenda that places the needs of his supporters, the labor union thugs, over those of Americans.

In a very sense it’s not that President Obama is Black; it’s that he’s Purple, SEIU Purple.

Obama: SEIU’s Agenda Is My Agenda

The Liberals and their minority tenants, with active and overt collusion of much of the MSM, elected an operative and organizer for SEIU and ACORN to the office of POTUS, and that’s exactly what was inflicted upon America – a hate-filled, filthy organizer for SEIU and ACORN, who has put their pernicious, destructive, anti-American, and vile agenda above the needs of the entire nation that he has been granted titular leadership of.

Obama: We Are Going To Paint The Nation Purple With SEIU

Yes, Americans are angered by President Obama’s union-driven attempt at a second Reconstruction of the United States. Since Americans would be equally outraged if a White POTUS did this, they’re not racists; they’re patriots seeking a way to end a threat to their nation.

This entry was posted on Monday, January 18th, 2010 at 6:17 pm and is filed under Politics. You can skip to the end and leave a response. Pinging is currently not allowed.

Given the facts that Labor Unions – the ghastly bastard offspring of organized labor – is a Socialist construct, that Islam’s Shari’a sets forth a required socio-economic model within the Caliphate that is very close to Socialism (Look at the economic model used by Iran as a guide), and that Al-Qaeda is made of up Fundamentalist Muslims it would seem logical that, sooner or later, the vermin in Al-Qaeda would organize and form labor unions.

Thankfully for humanity, it probably wouldn’t work any better for the terrorist vermin than it has for human endeavors. 😉

Muslim suicide bombers in Britain are set to begin a three-day strike on Monday in a dispute over the number of virgins they are entitled to in the afterlife. Emergency talks with Al Qaeda management have so far failed to produce an agreement.

The unrest began last Tuesday when Al Qaeda announced that the number of virgins a suicide bomber would receive after his death will be cut by 25% next January from 72 to only 60. The rationale for the cut was the increase in recent years of the number of suicide bombings and a subsequent shortage of virgins in the afterlife.

The suicide bombers’ union, the British Organization of Occupational Martyrs (or B.O.O.M.) responded with a statement that this was unacceptable to its members and immediately balloted for strike action. General secretary Abdullah Amir told the press, “Our members are literally working themselves to death in the cause of jihad. We don’t ask for much in return but to be treated like this by management is a kick in the teeth.”

Mr Amir accepted the limited availability of virgins but pointed out that the cutbacks were expected to be borne entirely by the workforce and not by management. “Last Christmas Abu Hamza alone was awarded an annual bonus of 250,000 virgins,” complains Amir. “And you can be sure they’ll all be pretty ones too. How can Al Qaeda afford that for members of the management but not 72 for the people who do the real work?”

Speaking from the shed in the West Midlands where he currently resides, Al Qaeda chief executive Osama bin Laden explained,

“We sympathise with our workers’ concerns but Al Qaeda is simply not in a position to meet their demands. They are simply not accepting the realities of modern-day jihad, in a competitive marketplace. Thanks to Western depravity, there is now a chronic shortage of virgins in the afterlife. It’s a straight choice between reducing expenditure and laying people off. I don’t like cutting wages but I’d hate to have to tell 3,000 of my staff that they won’t be able to blow themselves up.” He defended management bonuses by claiming these were necessary to attract good fanatical clerics. “How am I supposed to attract the best people if I can’t compete with the private sector?” asked Mr. Bin-Laden.

Talks broke down this morning after management’s last-ditch proposal of a virgin-sharing scheme was rejected outright after a failure to agree on orifice allocation quotas. One virgin, who refused to be named, was quoted as saying “I’ll be buggered if I agree to anything like that……..it’s too much of a mouthful to swallow”.

Unless some sort of agreement is reached over the weekend, suicide bombers will down explosives at midday on Monday. Most branches are supporting the strike. Only the North London branch, which has a different union, is likely to continue working. However, some members of that branch will only be using waist-down explosives in order to express solidarity with their striking brethren.

Of course this joke is predicated on a British venue. In America such a union of terrorists would quickly be subsumed by the larger, more organized, and more dangerous SEIU and/or Teamsters. The poor little Muslim filth wouldn’t stand much of chance of not being taken over by those thugs.

A laughing H/T to MidEastTruth for this one.

This entry was posted on Thursday, January 7th, 2010 at 1:09 pm and is filed under Humor, Politics, Society. You can skip to the end and leave a response. Pinging is currently not allowed.