The Once & Future Obama

Back in the lead up to the 2008 elections Obama was all about spreading the wealth. Amid the plethora of not-quite-promises that Obama jabbered during that campaign, that one message was said clearly and openly. Spread the wealth. And this bit of Socialist rhetoric helped carry him into the White House. 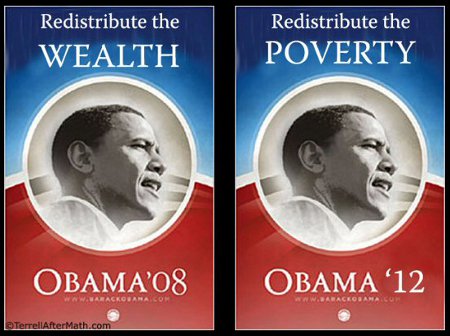 Once installed in office, Obama had to start his reelection campaign – after all, keeping his job as long as possible is always Job #1. This presented a problem for the Campaigner-in-Chief; how do you redistribute wealth, after you’ve gone to such great lengths to convince your followers that it’s a declining and failing resource?

Fortunately for Obama, his handlers were up to the challenge. They managed to shift their boy’s message from, “Make Them Pay” to “Make Them Hurt Too” – and spreading poverty is so much easier than spreading wealth anyway. 😉

This entry was posted on Tuesday, November 8th, 2011 at 10:39 am and is filed under 2008 Election, 2012 Election, Humor. You can skip to the end and leave a response. Pinging is currently not allowed.