Paul Ryan debated Joe Biden and Biden was certainly in full form and his performance was as passionate as it was colorful. In some ways the vice presidential debate was biblical…

If a wise man has an argument with a fool, the fool only rages and laughs, and there is no quiet.

“Laughing Joe” certainly was feisty and entertaining though. The Vice President’s chuckles, sighs, interruptions, and odd asides during the debate with Rep. Paul Ryan really stole the show, something that was not predicted to happen.

This entry was posted on Friday, October 12th, 2012 at 1:07 pm and is filed under 2012 Election, Humor, Religion. You can leave a response, or trackback from your own site. 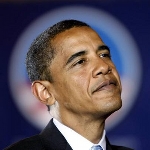 The two biggest problems with Obama are that he is nothing better than a narcissistic, petulant, little boy and that he’s utterly incapable of speaking the truth if doing so won’t perfectly serve his purposes, which are completely centered upon the image of himself he’s spent a lifetime creating.

Despite that being common knowledge it’s still amazing how much he and his cronies are decompensating as we near the 2012 elections.

It beggars credulity that Obama’s deputy campaign manager Stephanie Cutter would say that the terrorist attack at the US Consulate in Benghazi that killed four Americans was only important because Mitt Romney and Paul Ryan talk about the attack.

STEPHANIE CUTTER: In terms of the politicization of this — you know, we are here at a debate, and I hope we get to talk about the debate — but the entire reason this has become the political topic it is, is because of Mitt Romney and Paul Ryan. It’s a big part of their stump speech. And it’s reckless and irresponsible what they’re doing.

BROOKE BALDWIN: But, Stephanie, this is national security. As we witnessed this revolution last year, we covered it–

CUTTER: It is absolutely national security–

BALDWIN: –it is absolutely pertinent. People in the American public absolutely have a right to get answers.

When one takes into account that the Campaigner-in-Chief’s deputy – and whatever other positions she might be in under Obama – claims come not long after Obama had already politicized the Muslim terrorist attacks, this is essentially a “nuanced” admission that the Obama Regime didn’t and still doesn’t care about these Muslim terrorist attacks except in how they might effect the boy keeping his job a few years longer. 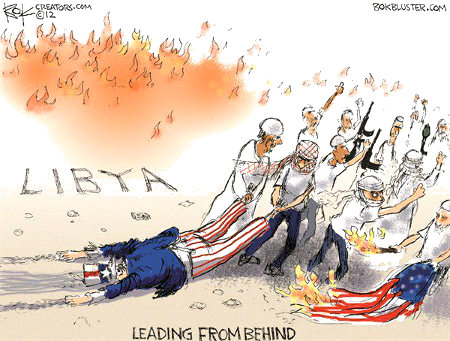 Yeah, Obama’s foreign policy of “Leading From Behind” has run into few “bumps in the road.” Sadly, those bumps were the mutilated corpses of Americans foolish enough to think that they’d be protected by the Obama Regime from the Muslims they were told serve among. 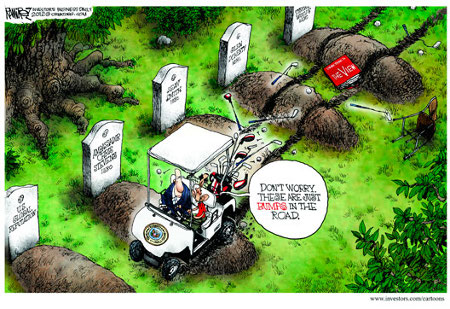 That’s not too shocking, actually. Obama’s only political experience was in Chicago’s South Side and was, therefor, more attuned to insurrection, terrorism, vileness, and violent crime than to defending against them.

I certainly wouldn’t mind four bumps in my road – not if they all had the last name of Obama and I could back up to my car make absolutely sure of each of them. ðŸ˜‰

Add in the logical conclusion as to what she was alluding to with her “And it’s reckless and irresponsible what they’re doing” line and any American can see that Islamic terrorist attacks aren’t the only thing that Obama just doesn’t care about.

America needs a POTUS who cares about our laws, our people, and our security in this ever more savage world and that leaves Obama out of the running. The boy just doesn’t care about anything or anyone except the vision he’s created of himself for himself.

This entry was posted on Thursday, October 11th, 2012 at 5:29 pm and is filed under 2012 Election, Politics. You can leave a response, or trackback from your own site.

As all Americans know, the Lamestream Media is strongly biased against us and any politician we might strive to elect to office. They’ve been the enemy of the American people for decades.

Their narrative is simple: Americans are vile, vicious, and cruel; Liberals and Progressives are kind, inclusive, and caring; and the minorities are the everlasting victims of the American people. 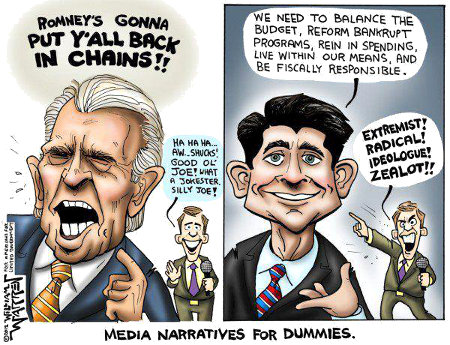 How they’ve chosen to portray Joe Biden and Paul Ryan respectively is a perfect example of this. That perfect example, however, also provides them some slight defense for their bias and their perfidy because they are not free agents in this matter. The Obama Regime does not believe in or tolerate a free press.

And, as Obama tries to shuck and jive his way into being given another chance, the White House’s demands to control all of the message grow ever more strident and tyrannical. More and more they throw the provisions and restriction of our Constitution into the gutter in order, in the words of Valerie Jarrett, to “really take power and begin to rule.”

It has been months since Obama took any questions from the White House Press Corps. In fact, that situation has degenerated to the point when even MSNBC, who might as well be officially part of his campaign staff, is questioning it. That is an odd thing since the Obama Regime has developed the habit of requiring the White House Press Corps to submit drafts of their stories for review, editing, and approval to Obama’s campaign staff before they are run or disseminated.

Obama’s campaign takes even more despotic measures to protect itself from harm when it comes to anything that Joe Biden might jabber in front of the press. They are actively editing the drafts of pool reports before allowing them to be shared with the media at large.

Of course, my sympathies are somewhat limited since there’s nothing that the Obama Regime is doing that is forcing the Lamestream Media to go far against the proclivities. Still, as much as it pains me to say it, the Obama Regime’s attempted destruction of a free press does provide the media with some slight defense for their actions as they relate to Campaigner-in-Chief, his coterie, and the current situation.

Remember always that, if the First Amendment were to be destroyed by some despot, it would be necessary for a People desirous of Liberty to apply the Second Amendment without restraint or mercy to the tyrants and all their kin unto the least babe.

This entry was posted on Saturday, August 18th, 2012 at 11:03 am and is filed under 2012 Election, Politics. You can leave a response, or trackback from your own site.