The Justice Department said it filed a criminal complaint against 27-year-old Conrad Alvin Barrett on Tuesday and arrested him on Thursday. According to Justice officials, Mr. Barrett recorded himself on his cellphone attacking the 79-year-old man, laughing and saying â€œKnockoutâ€ as he runs away.

The charge marks the first time the administration has taken action on a â€œknockoutâ€ case after the game became an Internet and media phenomenon. It chose a case in which the person accused is white, even though most other cases reported in the news have involved black assailants.

This entry was posted on Friday, December 27th, 2013 at 12:21 pm and is filed under Politics. You can skip to the end and leave a response. Pinging is currently not allowed. 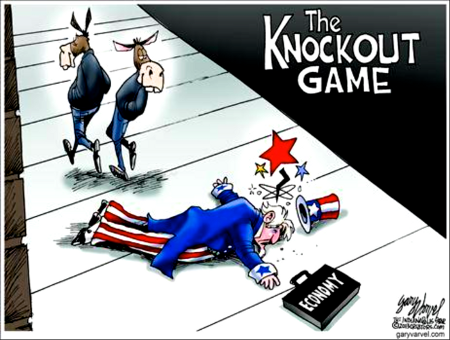 Given the intersection between the “Black Community” and the Democrats, this pretty much sums up the reality that Americans are now forced to deal with and be victimized by.

This entry was posted on Thursday, December 5th, 2013 at 10:06 am and is filed under Humor, Politics. You can skip to the end and leave a response. Pinging is currently not allowed.