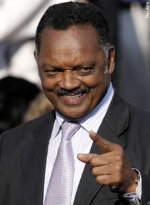 “At least the bus driver, who ordered Rosa Parks to surrender her seat to a white person, was following state law. Robertson’s statements were uttered freely and openly without cover of the law, within a context of what he seemed to believe was ‘white privilege.'”

Jackson is demanding a meeting with A&E and Cracker Barrel execs … and even issued a Friday deadline … urging the network to uphold Robertson’s suspension from the reality show.

This entry was posted on Friday, December 27th, 2013 at 11:46 am and is filed under Humor, Society. You can leave a response, or trackback from your own site.