Christmastide in America is supposed to be about warmth, caring, and family, yet that’s wasn’t in any way, shape, or form the tone, nuance, or feeling of the Obamas’ “Holiday” card. 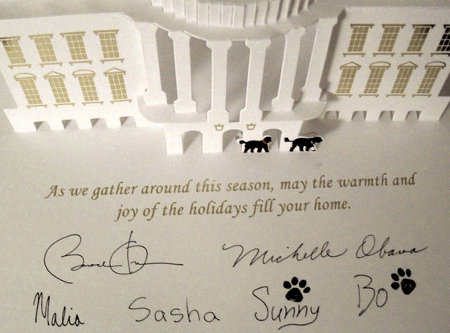 A Cold Season’s Greeting From The Obamas

It’s more than a little ironic that the card references, “the warmth and joy of the holidays” when its design and message is so cold, empty, and aloof. In fact it’s so ironic that, if I didn’t know better, I’d say that the Obama’s were courting the Hipster vote.

It’s colors are cool, not warm, which seems to refute the warmth that Christmas brings to people in the dark of winter. It shows a vacant building, which seems symbolic when one considers that Obama invariable answer to all the scandals revealed in the past year is to disclaim knowledge or responsibility. And lastly, despite going out at Christmas time and despite Obama’s claims to be a Christian, the card makes no mention of Christmas.

Still, this is what one has to expect from the Obamas. They are neither Americans nor Christians so whatever card they approved wasn’t ever going to glorify either the American idea of Christmas or the Christian one. Even the overall tone of the card should have been expected as it perfectly summates the elitist, aloof, above-it-all attitude that Obama has displayed since being installed into office.

This entry was posted on Friday, December 27th, 2013 at 8:20 am and is filed under Politics, Religion, Society. You can leave a response, or trackback from your own site.