This entry was posted on Sunday, March 27th, 2011 at 11:55 am and is filed under Politics. You can skip to the end and leave a response. Pinging is currently not allowed.

END_OF_DOCUMENT_TOKEN_TO_BE_REPLACED

This entry was posted on Tuesday, February 2nd, 2010 at 3:46 pm and is filed under Politics. You can skip to the end and leave a response. Pinging is currently not allowed.

In April, 2009, President Obama’s Defense Secretary, Robert M. Gates, drafted the proposed 2010 Defense Budget. It was definitely both a wartime budget and one that placed an emphasis on projecting and supporting troops in foreign theaters and fighting the asymmetrical wars that the US is currently engaged in prosecuting. Since it took both the changing face of warfare and America’s current financial situation into account, it was both painful to some and highly pragmatic.

Then it was submitted to Congress…

The US Capitol: Largest Pork Processing Plant In America

The O&M accounts are not for projects or new technologies; those are the accounts that pay for for: troop training, repairs, spares & supplies for vehicles, weapons, ammunition, ships and planes, food and fuel – the day-to-day operating expenses that are needed to maintain the operational efficiency and survivability of our servicemen and women.

From the Washington Times:

Senators diverted $2.6 billion in funds in a defense spending bill to pet projects largely at the expense of accounts that pay for fuel, ammunition and training for U.S. troops, including those fighting wars in Iraq and Afghanistan, according to an analysis.

Among the 778 such projects, known as earmarks, packed into the bill: $25 million for a new World War II museum at the University of New Orleans and $20 million to launch an educational institute named after the late Sen. Edward M. Kennedy, Massachusetts Democrat.

While earmarks are hardly new in Washington, “in 30 years on Capitol Hill, I never saw Congress mangle the defense budget as badly as this year,” said Winslow Wheeler, a former Senate staffer who worked on defense funding and oversight for both Republicans and Democrats. He is now a senior fellow at the Center for Defense Information, an independent research organization.

Mr. Winslow Wheeler, Senior Fellow at the Center for Defense Information, described the US Senate’s ransacking of Defense Appropriations bill as amounting to “rancid gluttony.”  Senator Tom Coburn (R-OK) called the looting, “a disgrace.” I call it what it is truly is – Treason.

END_OF_DOCUMENT_TOKEN_TO_BE_REPLACED

This entry was posted on Friday, October 16th, 2009 at 10:42 am and is filed under Politics. You can skip to the end and leave a response. Pinging is currently not allowed. 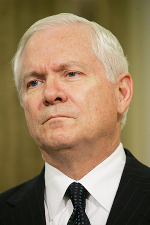