In a 65 to 31 vote, with eight Republicans joining the Democrats, the Senate approved a bill to repeal the legal ban on homosexuals openly serving in the US military. This renders the Clinton era “Don’t Ask, Don’t Tell” executive order unnecessary and moot.

It’s past fucking time that Congress got something significant right.

This entry was posted on Saturday, December 18th, 2010 at 6:28 pm and is filed under Politics. You can skip to the end and leave a response. Pinging is currently not allowed. 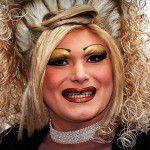 This entry was posted on Sunday, July 11th, 2010 at 3:30 pm and is filed under Politics. You can skip to the end and leave a response. Pinging is currently not allowed.

END_OF_DOCUMENT_TOKEN_TO_BE_REPLACED

This entry was posted on Tuesday, February 2nd, 2010 at 3:46 pm and is filed under Politics. You can skip to the end and leave a response. Pinging is currently not allowed.