This entry was posted on Thursday, September 25th, 2014 at 12:57 pm and is filed under Humor, Politics. You can skip to the end and leave a response. Pinging is currently not allowed. 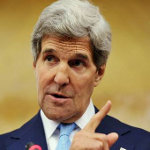 Sen. Mark Kirk was even more forceful in criticizing the officialsâ€™ presentation, calling it â€œvery unconvincing.â€

â€œIt was fairly anti-Israeli,â€ Kirk said to reporters after the briefing. â€œI was supposed to disbelieve everything the Israelis had just told me, and I think the Israelis probably have a pretty good intelligence service.â€ He said the Israelis had told him that the â€œtotal changes proposed set back the program by 24 days.â€

A Senate aide familiar with the meeting said that â€œevery time anybody would say anything about â€˜what would the Israelis say,â€™ theyâ€™d get cut off and Kerry would say, â€˜You have to ignore what theyâ€™re telling you, stop listening to the Israelis on this.â€™â€

This entry was posted on Thursday, November 14th, 2013 at 5:05 pm and is filed under Politics. You can skip to the end and leave a response. Pinging is currently not allowed.