Carpooling with Buddhists – it’s something to be avoided whenever possible, at least if you’re concerned about actually arriving at your stated destination. 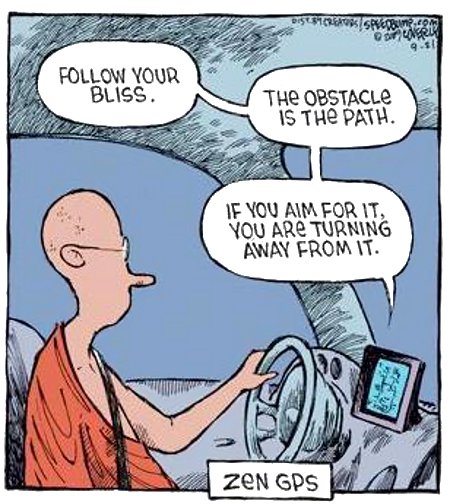 We’re Going To Be Very Late For Work

The most annoying part is that, if you complain about it, they tell you that the discomfort that you feel means that some portion of your karmic debt has been paid…and they smile.

This entry was posted on Thursday, February 9th, 2012 at 10:53 am and is filed under Humor, Religion. You can skip to the end and leave a response. Pinging is currently not allowed.

Sapporo – Not a Light Beer, An Enlightened Beer

It’s an incredibly well done commercial; both Dentsu Canada and Sapporo should be justifiably proud of the team’s creativity and skill.

Is it just me though, or is this commercial also a subtle metaphor for Buddhism’s six conditions or realms of existence, called samsara: Manusya-gati, Tiryagyoni-gati, Naraka-gati, Preta-gati, Asura-gati, and Deva-gati? Are they implying that one can reach nirvana by drinking beer, especially Sapporo?

I suppose it’s plausible. There’s supposedly truth in wine, so there might be enlightenment in beer. Beer is, after all, proof that the Gods love us. 😉

This entry was posted on Wednesday, February 23rd, 2011 at 9:35 am and is filed under Beer, Humor, Society. You can skip to the end and leave a response. Pinging is currently not allowed.

This entry was posted on Tuesday, April 28th, 2009 at 1:10 pm and is filed under Religion, Society. You can skip to the end and leave a response. Pinging is currently not allowed.