The Left On Israel

It is beyond reasonable doubt that the Left’s repeated excuses and pseudo-justifications for the decades of Muslim terrorism against the people of Israel, when stripped of their layers of dissemblation, are just another iteration of an old meme. 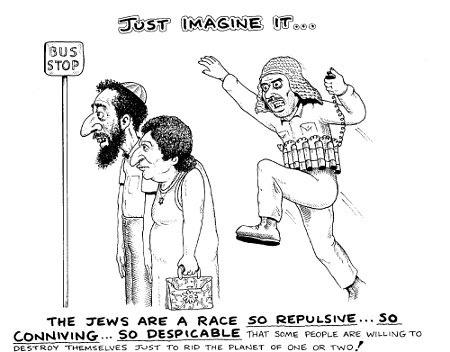 This Is How The Left Views Israel And The Jews

We in the Civilized World have seen and heard that particular rant many times before. Beginning in the 20th Century we stopped tolerating it and began the process of eradicating the people and groups who fostered it. It shouldn’t be considered a hard choice for any Red-Blooded American to continue doing so in this day and age.

This entry was posted on Thursday, September 2nd, 2010 at 9:46 am and is filed under Politics, Society. You can skip to the end and leave a response. Pinging is currently not allowed.

5 Responses to “The Left On Israel”