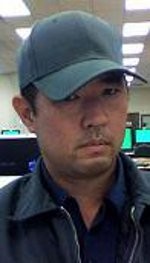 A rabid eco-terrorist and devotee of Daniel Quinn’s anti-humanist and anti-civilization doctrine, James Lee, has attacked the Discovery Channel headquarters in downtown Silver Spring, MD and taken an unknown number of people hostage.

It is armed with at least one pistol and appears to be strapped with explosives (eco-jihadi?).

The crazed Leftist eco-freak did all this because years of its protesting Discovery have born it no fruit. Discovery just wouldn’t kowtow to the filthy little monkey’s ludicrous demands and, like all of its breed, repeated failure eventually caused it to decompensate and revert to its more natural behavior pattern.

It’s biggest problem with the Discovery Channel seems to be that it believes that a lot of the network’s programing fails to discourage human  procreation. You see, it hates babies.

All programs on Discovery Health-TLC must stop encouraging the birth of any more parasitic human infants and the false heroics behind those actions. In those programs’ places, programs encouraging human sterilization and infertility must be pushed. All former pro-birth programs must now push in the direction of stopping human birth, not encouraging it.

Find solutions for Global Warming, Automotive pollution, International Trade, factory pollution, and the whole blasted human economy. Find ways so that people don’t build more housing pollution which destroys the environment to make way for more human filth! Find solutions so that people stop breeding as well as stopping using Oil in order to REVERSE Global warming and the destruction of the planet!

Saving the Planet means saving what’s left of the non-human Wildlife by decreasing the Human population. That means stopping the human race from breeding any more disgusting human babies! You’re the media, you can reach enough people. It’s your responsibility because you reach so many minds!!!

The above are just a sampling of the creature’s screed but the rest mostly devolve to the same Ishmaelite point; a majority of humanity should perish and the best way of doing that is to eliminate procreation. It and they hate human babies with a quasi-religious passion.

Fortunately this horrific episode has ended happily for America and humanity in general. The Montgomery County SWAT Team’s snipers exterminated this piece of filth before it could do any further harm.

This entry was posted on Wednesday, September 1st, 2010 at 6:06 pm and is filed under Politics, Society, The Environment. You can skip to the end and leave a response. Pinging is currently not allowed.

11 Responses to “It Hated Babies”