America’s anger and our rejection of President Obama’s agenda and how it was enacted by Pelosi’s and Reid’s Congress swept the Republican Party back into office across the nation. The GOP fared very well in the 2010 elections thanks to this repudiation of Statism, Socialism, and Liberalism.

What is important for these Republicans to remember is that this does not mean that Americans endorse that which has seemingly become the GOP’s agenda over the past few decades. We did not remove one set of Statists in order to replace them with another. 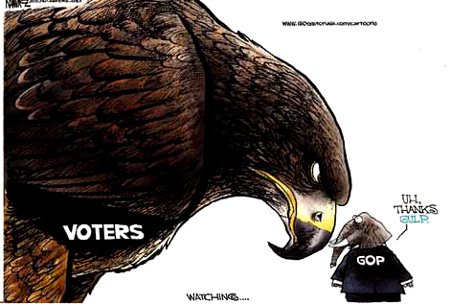 We, The People Are Watching; Remember That

Oh yes! It would be very wise for the Republicans to remember that the American people are watching them. It would also serve the GOP well to keep it firmly fixed in their minds that we have given them their marching orders and that their only job is to carry them out.

Failure would be quite costly since the voters will certainly punish such errancy in the 2012 elections. Failing to try to follow the will of the People could be far, far more costly for the Republican politicians and for those close to them.

There is a lot anger in the hearts of the American people, and rightfully so given that Obama, Reid, and Pelosi, along with their coterie of anti-American Liberals, chose to attempt to rule rather than govern by the consent of the People. But the anger that has been seen so far is as nothing compared to what will likely be seen if the GOP mistakes their electoral victories for a mandate and lives down to their reputation.

If they remember that we, the People are watching them and act accordingly, all will be well. If they don’t, things might go poorly for them and/or their kin. There’s enough anger right now that betrayal would be all it took to spark some people off – and who, all things being considered, could truly say that they didn’t understand the sentiments involved?

This entry was posted on Tuesday, November 16th, 2010 at 2:03 pm and is filed under Politics. You can skip to the end and leave a response. Pinging is currently not allowed.