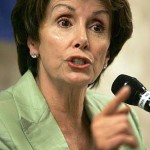 The soon-to-be former Speaker of the House, Nancy Pelosi was one of President Obama’s most feared and savage myrmidons. She was, and may well still be to some extent, a brutal, authoritarian leader for the Liberals who had insinuated themselves into the US House of Representatives. No one single person did so much or sunk so low as Nancy Pelosi did to further Obama’s and the Liberals’ Statist, neo-Socialist fever dreams.

It is not then surprising that Nancy Pelosi was also the biggest loser in the 2010 Congressional Mid-Term Elections. She’s losing the office of House Speaker and she’s seemed to have lost the confidence of the surviving House Democrats.

Of course Pelosi’s delusions know few, if any, bounds are are likely not amenable to conventional therapy. I doubt that she’ll quietly slink off into that dark night of obscurity. She’s not possessed of such basic grace, and she may be looking to get some “pay back” against the Obama Regime, who she no doubts holds responsible for her own failure,

This entry was posted on Tuesday, November 16th, 2010 at 5:24 pm and is filed under Politics. You can skip to the end and leave a response. Pinging is currently not allowed.