Untrue But Not Unfair

As has been discussed here before, there’s little or truth in any statement blaming a POTUS for high fuel prices or handing them credit for lowering fuel prices. No President has as any real power to affect such prices in the short-term.

That being said, it’s not truly unfair to chastise Obama over this issue because he has repeatedly “no quite called for” exactly a drastic rise in fuel prices in order to make it seem that he wanted to make the Liberals’ dream of “green energy” a reality, however Dystopian. 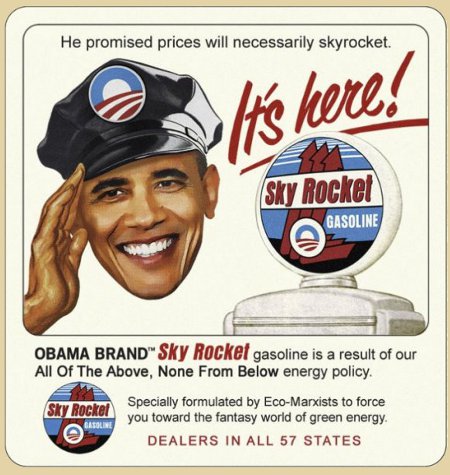 H/T to Soylent Green for the image.

Words have consequences and throughout the boy’s 2008 presidential election campaign Obama made statements endorsing a massive, though gradual, rise in fuel prices. So too does the choice of whom one surrounds themselves with have consequences and Obama appointed Steven Chu as his regime’s Secretary of Energy – a man who has been quite open about his desire to spike US energy cost up to European levels in order to make “green energy” commercially viable.

Given the above, while it’s untrue that Obama has raised or failed to lower gasoline and other fuel prices, it’s not unfair to chide him over them since their what he seemed to want his base to believe that he wanted. It’s a case of “Beware what you wish for,” especially if you wish out loud on an open microphone.

6 Responses to “Untrue But Not Unfair”