One can rarely help laughing at the antics of jackasses, except when one is forced by their evil or incompetence to take direct action against them. Even then, one can get a chuckle out of theire pleas for mercy and for the pain to stop. 😉

Take as an example the Democrats fluid stance on gasoline prices and who is to blame for them. 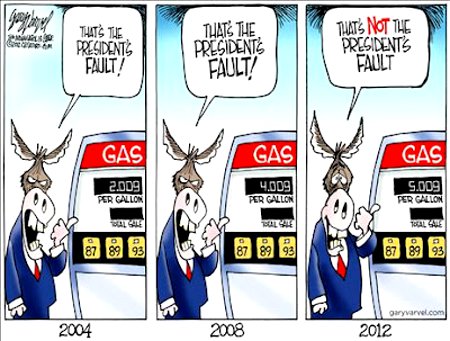 Democrats: That’s (Not) The President’s Fault!

For eight years gasoline prices, when they went up, were President Bush’s fault. Now, with their boy, Obama occupying the White House, even higher rising gasoline prices can’t possibly be his fault – even though he campaigned on attacking the oil industry and has, directly and through his proxies, said that he would raise fuel prices in order to make his constituents’ “green energy” corporations profitable.

Yes, the opinions of Democrats are still laughable. They, of course, should be grateful for that. It means Americans haven’t been forced to take direct action against them and their pain hasn’t really started yet. 😆

This entry was posted on Friday, March 2nd, 2012 at 11:31 am and is filed under Politics. You can skip to the end and leave a response. Pinging is currently not allowed.

8 Responses to “The President’s Fault”