That glass of water – is it half-full? Is it half-empty? Or, is it like the #Woke would rant, racist? And no, as sarcastic and comedic as most would find this, the #woke sorts and those that they pander to- and enable really say crap like that. But then, they say that anything “White” and anything that doesn’t specifically privilege non-Whites at the expense of Whites is racist. 🙄

This entry was posted on Monday, December 12th, 2022 at 11:00 am and is filed under Humor, Society. You can skip to the end and leave a response. Pinging is currently not allowed.

At the risk, such at it us, of sounding like a person of my age of any given generation, the 2016 elections seem to be one of America’s true watershed moments. To me it seems that we as a nation and people are and have been treading water in the middle of the Rubicon and are finally at the point where me must choose to: cross back to our own lands, cross over into something else, or simply allow ourselves to sink and drown. 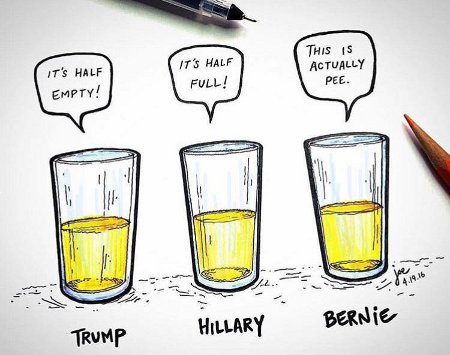 And, more so than has been usually the case, the major political players are each stark, living banners of the political, moral, and philosophical outlooks of the various subsets of America’s electorate.

Shall we make America great again by restoring and renewing it? Shall we further its transformation into something utterly unrecognizable? Or shall we drown, in this case in the effluvia of our own waste?

This entry was posted on Monday, May 23rd, 2016 at 11:49 am and is filed under 2016 Election, Humor, Politics. You can skip to the end and leave a response. Pinging is currently not allowed.