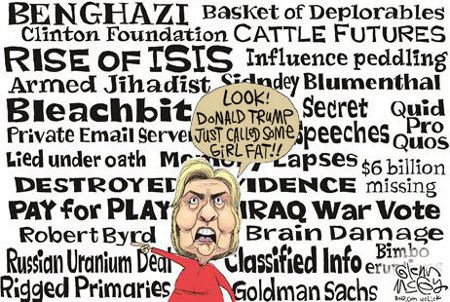 Apparently, some 20 years ago Donald Trump, then the brand new owner of the Miss Universe Pageant, “fat shamed” the then current Miss Universe, Alicia Machado by calling her â€œMiss Piggyâ€ and â€œMiss Housekeeping.â€ He also supposedly “publicly humiliated” her for gaining a large amount of weight after winning the pageant by inviting reporters to watch her work out at the gym. Trump even described Machado as â€œsomebody who liked to eat.â€ Apparently, this also seems to matter in the election circus or, at least, Hillary and her proxies want to make it so.

This entry was posted on Friday, October 7th, 2016 at 7:01 am and is filed under 2016 Election, Politics. You can skip to the end and leave a response. Pinging is currently not allowed.