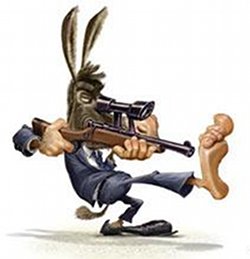 The Liberals trying to rule Congress and spread their version of Statism across America are set to commit “suicide by electorate.” Few of them will survive the 2010 Congressional mid-term elections because of how they’ve willfully chosen to ignore and disrespect we, the People on the matter of healthcare reform.

They should be assured that no American will miss them or mourn their passing from power – or life.

The House and Senate separately drafted hyper-partisan bills loaded down with kick-backs and bribes, mostly via committees and behind closed doors; in the wake of Sen. Scott Brown’s (R-MA) election they opted to misuse the Budget Reconciliation process aka “The Nuclear Option” to pass the legislation in the Senate with a mere 51 votes; finally, Pelosi and Louis Slaughter have chosen to “deem and pass” the bill in the House in order to avoid a floor vote upon it.

While none of what the Democrats, led by such Liberal extremists as Nancy Pelosi, Harry Reid, and President Obama, have done involving their plans to reconstruct the healthcare provisioning methods of America – functionally, if not explicitly, taking over 1/6 of the country’s economy in the process – is explicitly illegal or unconstitutional, most of what they’ve done is directly contrary to will and desires of the American people.

These Democrats will pay a suitably horrific price for their ill-conceived and pernicious actions and their failure to abide by the wishes of the American people. They will no longer be able to govern the nation, and they know it.

President Obama: Then You Can’t Govern

President Obama was right in asserting that, if they try to pass any major and invasive legislation such as ObamaCare by a 50 + 1 majority, neither he nor his Liberals in Congress will be able to govern the nation. Yet he and they no longer seem to care about that or about the American people who they obviously hold in contempt.

However, this turn of event was boldly foreshadowed many months ago; it shouldn’t come as a surprise to anyone. This has always been about them and their power of the People; never for a single moment was it about what we wanted or felt we needed.

Since it has been plainly shown to the American people that neither Congress nor the President serves the People any longer and seeks instead to rule over us – for our own good, of course – we are looking at both a Dead Congress and Dead President Walking.

Assuming drastic measures aren’t taken by either the People or Obama’s regime before that time, The 2010 elections will be a proverbial bloodbath for the Democrats and the 2012 Presidential election will be the proverbial death knell for Barack Obama.

We will just have to hope that it isn’t by that time too late for our country.

This entry was posted on Wednesday, March 17th, 2010 at 9:31 am and is filed under 2010 Election, 2012 Election, Politics. You can skip to the end and leave a response. Pinging is currently not allowed.