It seems that Wendy’s has gone green in an effort to differentiate itself from it competitors and to pander to Liberals and Progressives. 😉

This entry was posted on Wednesday, May 11th, 2022 at 7:16 am and is filed under Food & Drink, Humor, Society. You can skip to the end and leave a response. Pinging is currently not allowed.

A Sacred Pact To Fail

There is an unspoken pact between between businesses and the Eco-Left that dooms the environmental movement to failure in achieving the bulk of its stated goals while ensuring that the Eco-Leftists true needs are met. 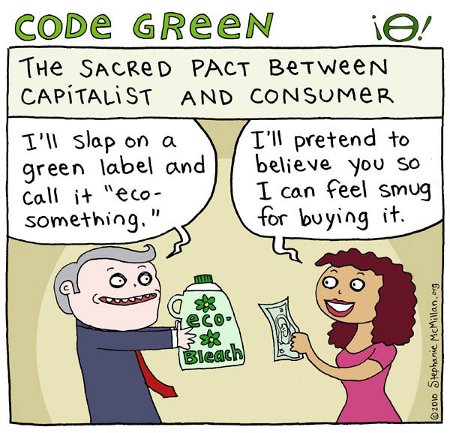 The Sacred Pact Between Capitalist and Consumer

It’s sad but funny at the same time; so many of the Eco-Leftists want or need to feel smug and self-righteous over being “green” and the corporations have always cared about little else than “the green.” 😉

This entry was posted on Tuesday, August 3rd, 2010 at 2:55 pm and is filed under Humor, Society, The Environment. You can skip to the end and leave a response. Pinging is currently not allowed.

Al Gore’s Greenwash is stripped away as repeated note of his energy hogging, extravagant lifestyle is taken. Here’s an excerpt from an article on Green Hypocrisy:

While the former veep and nouveau-$100 millionaire jets around the world squawking about the “planet having a fever” and demanding that we all lower our standard of living, his own personal electricity use is 20 times the national average, including an indoor pool costing $500/month to heat.

While Gore deflected criticism of his inconvenient electric bill during March congressional testimony by saying he purchased “green” electricity, the truth is, he didn’t start doing so until 2007.

Is it just me, or does Al Gore strike anyone else as someone who may “talk the talk“, but who is completely unwilling to “walk the walk” – all the while stridently demanding that the rest of us, who have fewer resources the he does, do so in his stead?

I’m not going to discuss Global Warming in this post because it’s secondary to the point of Al Gore’s hypocrisy. Let’s suppose though that Global Warming is terribly real. Let us also, for the sake of this particular discussion, suppose that human actions are the primary cause of Global Warming. Is a grandstanding hypocrite really the icon people should want for the issue? Think about it.

This entry was posted on Tuesday, December 11th, 2007 at 5:39 pm and is filed under The Environment. You can skip to the end and leave a response. Pinging is currently not allowed.