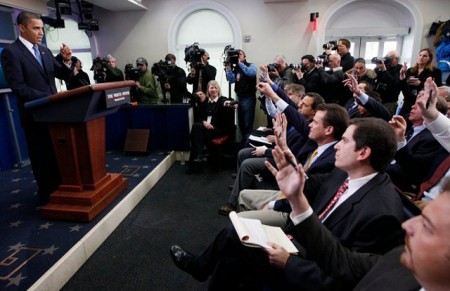 Many will be tempted to ask if this indicates a thawing of the “relationship” between President Obama and Fox News. Others will choose to see it as President Obama capitulating to Fox News. They would all be wrong since the Obama Regime has little or nothing to do with Fox’s being granted a prime front row seat in the briefing room.

The decision of how the seating would be rearranged in the wake of Helen Thomas’ unlamented departure was solely in the hands of the White House Correspondents Association (WHCA), an organization represents the White House press corps in its dealings with the administration on coverage-related issues and which is made up of reporters and journalists, not necessarily White House flunkies.

The WHCA has a nine-member board of directors, elected annually by correspondents, which addresses access to the POTUS;  press coverage arrangements; reporters’ work space arrangements; logistics and costs for press travel to accompany a president while on the road.

It was the decision of those nine members of WHCA’s Board of Directors to move Fox News to the front row, not that of anyone directly associated with the Obama Regime.

The board of the White House Correspondents Association has agreed, by consensus, to move the Associated Press to the front row, center seat in the James S. Brady Briefing Room.

It was a very difficult decision. The board received requests from Bloomberg and NPR in addition to Fox for relocation to the front row and felt all three made compelling cases. But the board ultimately was persuaded by Fox’s length of service and commitment to the White House television pool.

Fox News being moved to the front row of the briefing room might be construed as slap in President Obama’s face and loss in his war against unsympathetic press coverage. If it is such, however, it is likely just a delayed punishment for President Obama’s failed attempt last October to ban Fox News from the White House press “pool” entirely, an attempt that somewhat surprisingly the WHCA refused to allow to succeed.

On the other – and I think more likely – hand, it could just be that the WHCA actually has some basic standards for such things and could maintain the respect of their membership if they sat those standards aside to Fox’s detriment – even if they might otherwise have wanted to do so.

This entry was posted on Monday, August 2nd, 2010 at 7:19 pm and is filed under Politics. You can skip to the end and leave a response. Pinging is currently not allowed.