Did you ever wonder if Al Gore’s cultists, the Warmists at the Climatic Research Unit (CRU) of the University of East Anglia (UEA) used Microsoft Office when they were “cooking” the books on Global Warming? If they were, it might of looked like this: 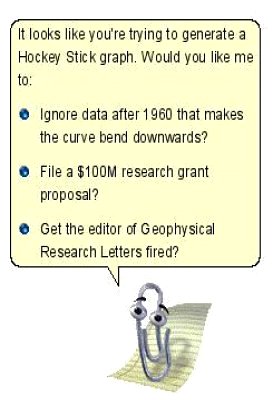 That’s old Clippy for you – so helpful and yet so completely and absolutely amoral. The little guy never did care what you were trying to do; he’d help, as best he could, no matter what. 😉

This entry was posted on Saturday, December 5th, 2009 at 5:41 pm and is filed under Humor, Politics, The Environment. You can skip to the end and leave a response. Pinging is currently not allowed.

The world is now several weeks into the scandal of Climategate and the Warmists are in denial.  As a whole their response to a currently unknown hacker breaching the security of Climatic Research Unit (CRU) of the University of East Anglia (UEA) and leaking over a thousand emails and other documents has been to not respond. The Warmists have done their best to completely ignore this scandal and continue to maintain that “the debate is over.”

The cultists of Al Gore’s pseudo-religion, Anthropogenic Global Warming (AGW), desperately want this scandal to be dismissed and forgotten.

Sadly for them, the leaked material comprised more than 1000 e-mails, 2000 documents, as well as the commented FORTRAN source code for modeling and data analysis, pertaining to Global Warming or Climate Change research from 1996 to 2009.  Much of it was very detrimental to both their credibility and their faith.

For the purposes of disseminating raw data for independent review I have provided the zipped contents (63.4Mb) of the compromised CRU server here.  Form your own opinion!

Possibly worse for them, those emails included discussions of how best to combat the arguments of climate change skeptics, defamatory comments about those skeptics, various queries from journalists, drafts of scientific papers, apparently successful attempts to keep scientists who have contrary views out of peer-review literature, and talk of destroying various files in order to prevent raw, unmodified data being revealed under the Freedom of Information Act. 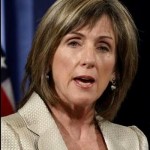 President Obama’s “Climate Czar,” the Director of the White House Office of Energy and Climate Change Policy, Carol Browner, was especially fervent in her denial of the issues uncovered by Climategate. Irrespective of whatever evidence of shoddy work and outright  malfeasance has come to light, she’s holding firm to the Warmists’ dogma and dismissing any complaints as irrelevant and from some “fringe” of society.

She’s either a True Believer in the Cult of Global Warming, or she just wants to keep her job, which is predicated on the Warmists’ doctrine, and remain somehow relevant.

A very small group of people who continue to say this isn’t a real problem? A couple of naysayers? Carol Browner obviously has as little grasp of math as she apparently does of any other hard sciences. The Pew Research Center’s most recent survey concerning Global Warming showed that only 57% of Americans believed that there is solid evidence that the Earth is warming at all and only 36% believed that such warming was anthropogenic in origin.

Nobody in anything remotely close to their right mind would honestly try to describe between 100 – 200 million people as “a very small group” or “a couple of naysayers.” Of course this isn’t about honesty; it’s about denying that her raison d’être – and her raison d’être employé – isn’t being accepted as much as she needs it to be and that it just got exposed, once again, as being based on poor data, substandard modeling, slipshod analysis, and an agenda-driven “group think” that actively silenced contrary opinions and theories.

There’s a certain schadenfreude to be derived from watching the Warmists, who disparagingly label any dissenters or skeptics as “Deniers,” running around in denial themselves. Indeed, the delectatio morosa that one can derive from the Warmists’ childish reaction to the discomfiture that Climategate has caused them is positively sinful.

They can deny the problem all that they want to. They can dismiss the scandal and the flaws and malfeasance it uncovered and forced into the public eye all that they want to. Doing so doesn’t change the fact that there is still debate about Global Warming, both its very existence and its possible causes, and that Climategate dramatically hurt their position.

This entry was posted on Wednesday, December 2nd, 2009 at 1:03 pm and is filed under Politics, The Environment. You can skip to the end and leave a response. Pinging is currently not allowed.